Earache has no 'Avant-Garde' bands any more? 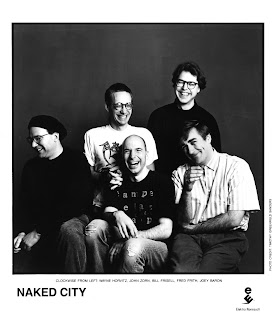 Question: Dig, you mentioned how hard it is to find new scenes and start new musical genres nowadays. Bands that are creating are faced with hostility and misunderstanding. However, they are the ones who progress when the genre is set and clones begin to appear. Earache had been focusing in re-heated thrash metal (80s clones) and the established mainstream scene of metalcore. Do you ever feel you would go back to the days of releasing REALLY out there and risky stuff like OLD, SCORN, PAINKILLER and so forth? Bands that had no fanbase, no hype around them, but the art itself was something new? Even SCUM and the whole grind scene were risky at a time that was not understood at all (Say Mosh 003-50)

Record sales are down and playing it safe is the rule for money making, but do you have the drive or will to release absolutely avant garde, risky stuff that may or may not mark the world of music forever? Or is it Earache now strictly about keeping it safe within the established metal genres and revivals that are floating the market, providing what you see as \"quality stuff\" within well defined and already hyped up and popular scenes? From: urmlefou@gmail.com


Answer: I dunno dude, one person's cutting-edge Avant-Garde band is another person's snooze-fest.Its all about individual tastes, and for Earache, having a label is all about inflicting our taste in music on the public.As you say, we've been taking the risks and releasing bands who have no fanbase to speak of, and definately no peers, for decades. You mention OLD, SCORN and PAINKILLER.We did John Zorn's Naked City too (see pic above). Don't forget ULTRAVIOLENCE, DOA, TEMPER TANTRUM and DELTA 9- the harsh electronic music they made was considered radical and out-there back in mid 90's , nowadays of course there exists a thriving Hardcore Techno underground.

Even DUB WAR aswell, their mid- 1990's Drum n Bass excursions were highly risky and would'nt be classed as any kind of safe option for a Metal label.Latest example might be Ewigkeit, who were a brilliant UK rock band innovating with experimental sounds and sound-bites.

When bands take off its a vindication of our choices and immensely satisfying. But when they fail and the fans shun them, we face the sometimes bitter recriminations.When bands find they have no takers it knocks the stuffing out of them unless they have abnormally high self confidence. Ultimately it leads to members leaving, or the clever ones quickly bury their mistake and move onto pastures new.From a label point of view its no fun losing money and believe me, selling no records gets boring real fast.

Thats not to say we don't like taking risks, actually we get a kick out of doing the un-obvious and keeping things interesting.Earache does have some bold plans for some immensely risky releases soon though, expect to read about that stuff later in the year.

I'm keen to know what sort of Avant Garde bands you are referring to? Please feel free to comment on this post with names of suggestions and links to hear the bands you feel Earache should be pursuing.
Posted by Digby at 12:47 PM

quick question to the person who asked the question wtf dude? earache have got avant garde bands on their roster Ephel Duath for instance and cult of luna crossing sigur ros and radiohead with neurosis and godflesh was a genius move on that bands part. Also from speaking to mick harris before painkiller had run it course hence why its no more. Personally i see alot of avant garde bands as a snoozefest however i do like alot of the avent garde black metal scene blut aus nord, caina, the axis of perdition etc also noise like navicon torture technoligies of new york or suncrusher from cardiff( going on projects ive seen at noise festivals), would love to see earache get involved with an experimental noise artist. wouldnt be the best seller but could beseen as them branching out further.

Dig here are some bands which, with their failures and successes, are trying to create something. Some of which already have their labels or have even broken up, but do or did stuff which is very different from the established and trendy scenes of metalcore and thrash revival. Surely they don't enjoy hundreds of thousands of sales, but I would say their creativity is stimulating and fresh, which was what I got from Earache in the past :

Mörser, some energetic grind that gets the Earache lesson and puts it forward, fucking awesome:

Can Can Heads, experimental stuff you might have released in the early 90s... who knows?

The classic Mexican Power Authority, ex neo members, I suppose you know them?

Genghis Tron, I'm sure you are familiar with

As the sun sets

I'm sure you know Today is the day

To me these bands sound WAY more like the groundbreaking bands that you signed in your first ten years, and that with their mistakes and successes, have defined new genres and marked music.