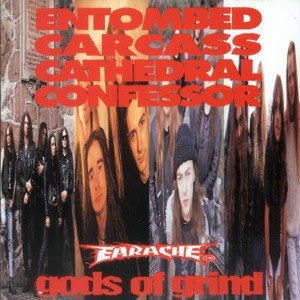 Is there any chance of seeing one day a DVD of Earache's Gods of Grind Tour of '92, as broadcasted by MTVe's Headbanger's Ball at the time?

I know there exists live DVDs from most of the bands who where on that tour, but I would like to see the whole Headbangers' Ball show dedicated to that tour, with the interviews and all. From: vukotich@hotmail.com


Answer: Obtaining permission from MTV for footage to put on DVD is extremely tough, it is rarely granted, even if the bands and 'Gods of Grind' event was Earache's idea in the first place. The MTV coverage did include more interview and documentary footage which probably made the broadcast more interesting, Earache was mostly concerned about capturing the live shows for posterity, because the bands were arguably at the peak of their creative powers. So here is it- the crowd was over 2000 people, and it took place almost exactly 18 years ago.

Watching the shows back, the main thing I notice is the lighting rig, which was the same circular moveable rig Motorhead famously used on their early 80's "Bomber" tour. I recall we also spent a fortune on a state of the art (for early 90s) computer generated lightshow and its operators.Those lasers, circles and stars which run across the stage, that was the hallmark of a highly radical lightshow for the time.

In the interview clip it's noticable how much Carcass try to distance themselves from the chasing Grindcore pack, citing melodic rock as a new-found influence.This would be demonstrated on the Heartwork album released a year later.

Confessor were also filmed but the footage has never been edited.

Would love to see the Confessor footage eventually.

I'd kill to see that Confessor video

I was at the show in London... wasn't it the gig where Entombed effectively ruined their set with some ill-conceived bit where the two guitarists smashed their guitars together at end? You knew something was wrong beforehand as the obviously compromised guitars (ie tweaked to smash properly) sounded awful. At the expense of a Big Song.

Can anyone remember the Four Way Thrash tour they did in the 80s? I remember Carcass,Morbid Angel and I think Napalm Death but cant remember the other. I was at the Hummingbird in Birmingham UK but was drunk at the time ha ha!!!! Please help cheers.

The night those bands played the Astoria, I was in the Garage in Highbury watching Napalm Death perform for a Cable TV show (Super Channel I think). There were only a few of us there because obviously most people were at the Astoria (No idea why it was thought that night would be a good night to do the show, but hey). Does anyone have this footage? I've never seen it because I don't have cable TV.