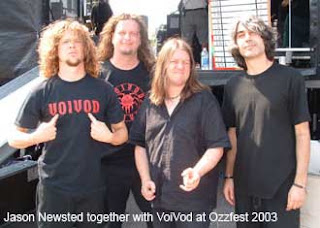 Question: Is it possible that the new wave of thrash is a bit too retro looking for its own good? I mean there doesnt appear to be a modern equivilent of the weirder more progressive thrash bands that made the original scene more interesting eg voivod, celtic frost, sabbat(uk) or sadus it seems as if most players are into playing a kirk hammett or a gary holt riff over a lombardo esque drumbeat. From:

Answer: Well yeah, that seems to be the case- as anyone who was around in the 80's will tell ya-Voivod made their name playing quirky, cerebral, off-kilter metal (pic above with jason newstead in 2003) same for Celtic Frost etc but by the same token the big 4 were more straight down the line thrash, with few quirks, and they are the ones who succeeded in the long run.Through the lens of hindsight, it was undoubtedly EXODUS, (early) METALLICA, ANTHRAX, MEGADETH & SLAYER who defined original 80's Thrash, not Coroner or Voivod.

I should point out that as far as i can tell the new modern thrash bands mostly didn't set out to create a carbon copy of the 80's scene, in all its diverse glory.Contrary to the musings of know-it-alls in forums etc, NON of the Earache thrashers are doing it ironically or are manufactured to be trendy, they genuinely worship the old style, because its new to them.
Mostly, being still teenagers or early 20's dudes, they just wanted to PLAY THRASH because its music they have downloaded, and because to them its fresher and more relevant than the modern styles which dominate todays scene-like say, death metal or metalcore etc. Also a heavy punk/crossover influence is evident aswell..who knew that bands like DISCHARGE or EXPLOITED or SACRILEGE or ATTITUDE ADJUSTMENT would be cited as major influences by upcoming metal bands in 2008? It's amazing that a genuine crossover is going on. 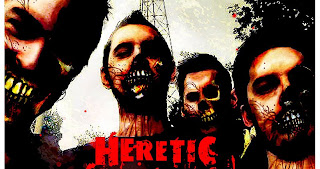 To answer your question,a UK band like HERETIC are pretty quirky and non-generic,and are the band you are seeking, but its debatable whether they are so far removed from the scenes style, to be part of it.
Totally unrelated- but I actually think the new thrash bands are responsible for Death Magnetic sounding like the return to form it does.
Posted by Digby at 2:12 AM