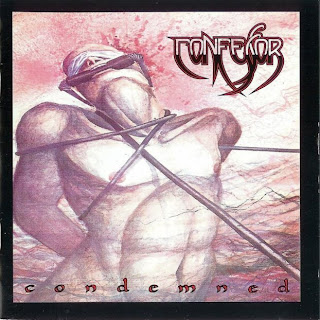 Question: Hi Dig,
Was just wondering was Mosh 44 \'Condemned\' ever reissued, or just the initial pressing? I managed to win myself a mint/unplayed cd copy on ebay recently!! While on the subject of re-issues, why is it that some of the earlier stuff (like Entombed\'s \'Clandestine\' appear to have inferior quality sleeve artwork to the original pressings? The Godflesh \'crumbling flesh\' website says a similar thing about the \'Streetcleaner\' sleeve artwork.
Cheers and keep up the good work
Regards Craig From:


Answer: Confessor has never been re-issued by us since the actual 1991 release so its an original you have there.The band were criminally under-appreciated when we did them because the label was mostly doing extreme death metal and grind, so fans ignored them even tho we thought they were killer.
As for the artwork, in many cases it does cause us immense problems when we re-issue early 90's albums because sourcing the original art is hard, the art back then was pre computer, it was all designed by hand, using paste-up and transfered to film for printing the covers by photographic means.Now a decade and a half later, when we come to re-issue an album, while we have a library of archived art in the office, for some titles its not always possible to source the original art, so we use hi res digital scanners to scan in the cover, which is only as good as the printing at the time.Paradoxically the resolution of the film used on the originals is greater than the resolution of digital scanners today, meaning on some occasions the art looks lower quality.
Posted by Digby at 8:33 AM