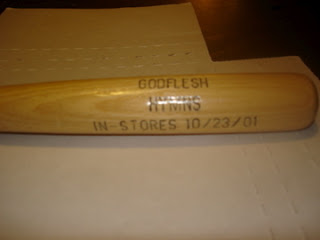 Question: I saw a godflesh promo baseball bat come up for sale on ebay. Im wondering firstly is this a genuine promo item? also how rare/valuble are they? From:


Answer: At first I thought you were winding me up dude- a GODFLESH Baseball bat- err thats a joke, right?..but yeah you are correct- I'm flabbergasted that such an innappropriate artifact exists and is for sale.Nothing to do with Earache dude, this was made by the bands "other" label, the knobheads at UK label Music For Nations released the final Godflesh album "Hymns", and obviously thought it would be a wizzard promo idea.Actually thinking about it, its probably made by the US label which did Hymns- Koch.Baseball bats are associated with either 1) sports or 2) violence - neither of which are subjects that reflect Godflesh's music, I would have thought.The band split up during the promotion around Hymns, and MFN label folded a year or two later.Koch still exists and is a powerful major-style label, its main sellers are Rap artists and the multi- million selling japanese Pokeman cartoon tie-in Cds.
Posted by Digby at 1:37 AM