How important is image to a new band? 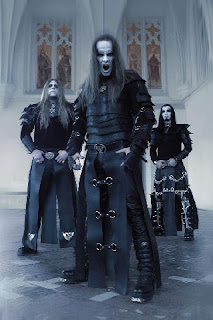 Question: Dig, you mention that a band picture is something important when checking a new band out, and I remember you saying you didn't sign AngelCorpse because of the looks of the singer.
How important are the looks of a band for you? Have you always had this concern, asked a band member to change style or something? When did it become important to you and why? From:


Answer: This is a tricky subject to talk about, as the image and style of a band is never really overtly spoken about at Earache, we've never sat down and changed the image of a band on the label for instance. But in general we find it is the fans themselves who are extremely quick to judge a band from the looks, style and clothes of the players. Fans do indeed judge a book by its cover, every time.

Yes, as I wrote in a previous blog,one of the main reasons I didn't sign Ripping Corpse (Erik Rutan's first brutal DM band) in 1990 or so, was because the band were long haired, black T-shirt wearing dudes, yet the singer was a Hardcore guy in white vest, short hair and baseball cap. It made the players seem disjointed and not cohesive, so I passed on the band. Death metal and hardcore simply did not mix back in the early 90's beginnings of the DM scene. 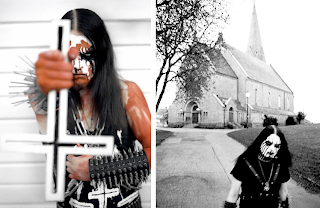 In Death Metal and grindcore circles, the band image is considered of secondary importance to the overall quality of the music.It took the mid-90's rise of Black Metal to suddenly force strongly coherent band image right to the top of every fan's agenda. Not many people realise that it was the corpsepainted and spiked armband Black Metal bands who hit the make-up box with such zeal, you could argue that in terms of presentation, they were the direct descendents of the Glam Metal era, or at least Kiss. This fact is rarely discussed.

Try to imagine for a minute a retro Norwegian Black Metal band with 3 corpsepainted and fully spiked-arm members, and a short haired singer in tattoos & Hatebreed shirt.Would you sign such a mixed up band? See what I mean- Its not gonna happen is it?

Fans in general are an unforgiving bunch, they can be as harsh in condemning a band for a fashion faux-pas as any coffee-table women's magazine. 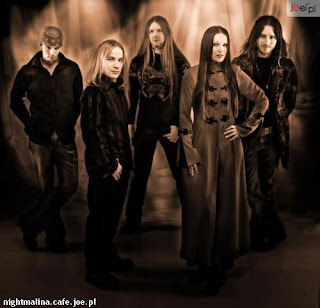 In the underground metal scene of the 90's image was not that important, but when labels like Nuclear Blast and Century media began releasing their hugely successful Gothic metal acts Lacuna Coil or Nightwish, they totally raised the bar for how an underground metal band should be presented. Suddenly, sophisticated and elaborately staged band photoshoots were everywhere you looked, making Earache's mostly jeans 'n' T-shirt brigade appear completely out of touch with the times. In many ways the rise of the internet meant that bands with a strong and instantly recognisable image in a high quality photosession could gain a fanbase faster than ever before. 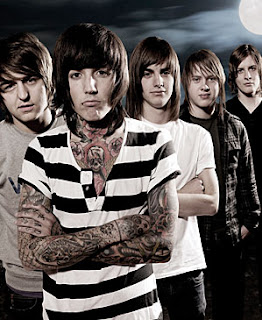 Many fans- especially ones in the notoriously image-conscious emo & deathcore scenes - can decide they like a band way before they have heard actually heard any music, the style of haircut alone can make the difference between being accepted or not.Bring Me The Horizon would be a great example of strong and consistent image. 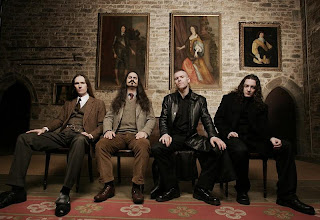 Earache has had a few bands who made some strange decisions regarding image. When we signed Akercocke, the band had an extremely strong image as sharp-suited London satanists. We spent thousands of pounds on high quality photoshoots and sets depicting the band as suited and booted country squires, and the band totally stood out from the pack of BM bands. Fans loved the band for this. Yet on the eve of their debut USA tour the band chose to ditch the suits, instead they performed in jeans and T-shirts, and many US fans told us they had doubts that it was actually Akercocke who had just performed before them.Such is the power of strong imagery, fans were perplexed when the band decided to change tack. I wonder if Slipknot would ditch their masks prior to a tour? Somehow I doubt it. 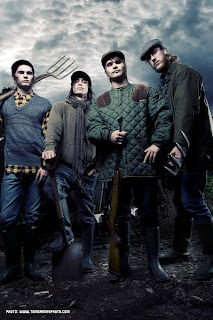 Sometimes bands choose to make a quirky statement about themselves when given the opportunity to do so. Earache has a brilliant new school Death-Metal band called The Boy Will Drown who hail from Norwich, which is in the farming belt to the East of England. To show they are not hung up on image, they ironically dressed up as farmers for their first official shoot. This image spread all over the web, and I'm pretty sure it has alienated their potential fanbase of fellow death metallers, so it was basically ill advised. 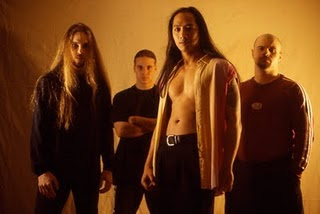 Here's another disasterous shoot- this picture look like it contains a dude right out of a cheap knitwear catalogue, and some guy modelling generic sportwear. Little would you know that in fact the guys on the right of the pic are Kam Lee and Rick Rozz, both originators of Florida Death Metal, and this pic was the offical pic to promote 1995's Massacre album 'Promise'- an album which fans shunned. CORRRECTION! Kam Lee himself has pointed out that its not him in the Massacre 1995 pic, its the then brand-new bass player Pete. Oops I guess we forgot Kam had already let the band by that point. Sorry Kam, we are forgetful idiots!

Even legends can have a bad wardrobe day.
Posted by Digby at 12:03 AM

From what i remember ackercocke saying it was sheer logistics that made them make the jeans and tshirt decision in the US how doing lots of dates made it impossible for them to appear in a clean pressed shirt every night of the tour.
And like peter theobalds said "suits fucking stink" after playing a lot of shows in them.