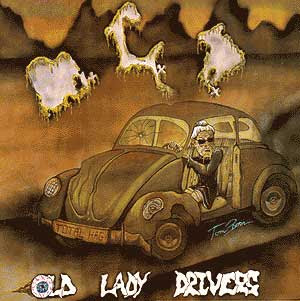 Question: Thanks for answering about the first time on vinyl.But what about first time on CD.I need OLD and Intense Degree Earache versions on CD for my early earache collection, any chance of these being released? From: Jimplotkinsguitar55@gmail.com

Answer: I can't believe I'm actually reading this! Seriously, this topic crops up so regularly on this blog, you'd think they were world-beating bands we're talking about.Sadly, neither were. Looking back using the 'search this blog' feature in top left of this page, I see it was first answered back in 2005.Now, five years on, you're still asking. You collectors never give up!

You could say I'm doing Jim Plotkin's career a favour by not releasing his debut, OLD LADY DRIVERS. Earache's 7th release was only ever on vinyl, and showcases Jim Plotkin's early proto- grindcore outfit. Warning- it comes with a level of juvenile humour which is hard to stomach even now.It was only on the later early 90's OLD albums like 'Formula' that Plotkins shimmering guitar playing and sense of atmosphere came to the fore. That one is a forgotten gem of a record, but the debut is nothing amazing.

Apparently Plotkin himself made and sold a bootleg of OLD debut a few years back, which I've never seen. I do realise that a lot of fans want the complete set of the early Earache titles, it looks odd that so few of the early titles made it onto CD, but the format was so expensive to produce back then, thats just how it was. If I searched for a bit I might uncover the masters deep in the vaults- which is basically two store rooms in my house- so could re-issue them no problem. To be honest, its more interesting for me to keep things like the early Earache catalogue in its original haphazard state, because thats how it was made originally, that's how history intended it to be.

A few years ago we did offer a few obscure titles for other labels to license and produce on CD, OLD was on the list, but there were no takers for it. A company in Japan called Disk Union did the Intense Degree album on CD.I guess since the release of the John Peel sessions 3 x CD compilation 'Grind Madness at the BBC', there is a bit of a renewed interest in Intense Degree's only album "War In My Head'. Good luck finding that one!

"Record Collectors are Pretentious Assholes" - that's the title from a Poison Idea release back in the 80s. Early Earache act HERESY had some fun with that idea in a photo shoot (see pic). Nowadays I'm really liking the fact that Earache's early titles are not at all easy for newbies to collect.I consider it as a bonus for any old school fans who are still around from back in the day, who might already have the original Earache pressing on LP. I like the fact that only a single one-time pressing of OLD LP exists, probably only 4,000 were made. Same number with Intense Degree. If you really want it, you'll just have to wait for one to pop up on e-Bay, sorry.

Actually there is one extremely unlikely scenario which might change this. In recent years a ton of 90's era bands from this label have been reforming and reactivating themselves to take advantage of the modern touring and festival opportunties. I dont blame them because back in the early 90s no such festivals existed, the scene was so small its hard for anyone to understand nowadays. I for one, never had a clue that Carcass, Brutal Truth, Sleep and even Godflesh would all decide to give it a go and reform, even after over a decade of inactivity in some cases.

Hell might have to freeze over first, but if Plotkin & Dubin decided to reform OLD its likely they could even receive decent festival offers - maybe even OLD & PITCHSHIFTER for Hellfest 2011?- then we'd be forced to re-issue the Cds to co-incide.
Posted by Digby at 10:42 PM

It seems odd to let eBay garner profits that could be yours, especially when the only costs involved would be manufacturing. That reminds me a bit of ticket scalping. Granted, if you reissued early Earache stuff, the premium on rarity would go down, but you could capitalize on people who just want to have physical copies of albums without needing first editions. There have to be people like that - for example, looking at eBay listings, giving up after certain price points, and then moving on.

I somewhat appreciate your attitude towards record collectors being an old punk. However, as a business person (and you can't own a surviving (thriving?) 20+ year old music company and not be a business person) it strikes me as odd that you are making it hard for people to give you money. Especially since you have already have made the initial investment in the recordings.
Just something I find odd.

Following the two last comments, it's really weird that you have had about FIFTY offers from labels to reissue vinyl and are unwilling to do so.

It is, after all, throwing money away. If so many people ask about the old bands all the time in this blog, and so many labels are looking for you to license old albums, it is because there is money to be made with this. In other words, keeping this vinyl in print, much in the way that SST records does with theirs, you would be oiling your money machine and generating profit.

I'm guessing you would sell more copies of these albums if they were still in print than you do with some of the new stuff you are releasing?

I understand the will to honor old punks who were there at the time these things were released, but on the other hand, thinking of labels that always keep their stuff in print (SST, again, being the best example I can think of right now), and more than that seeing that there IS a market out there for rabid vinyl collectors, saying "no" to those 50 offers you had is basically saying no to money! It's amazing you actually can do that these days!

but if Digby re-issued the missing back catalog on CD how many would actually sell? he mentioned in another back catalog question that the label gave in to pressure over Spazztic Blurr and then hardly anyone brought it.

i love the first OLD LP and got a copy off ebay but hypothetically if Earache presses 1000 copies of Filthy Christian's/Sore Throat/Cadaver/Intense Degree etc on CD i wouldn't imagine them moving many units except to the rabid collectors or curious newb but what would that be 300-500 people?

i realize its subject to taste but it seems like those bands have a cult status because not everyone has heard the actual recordings which i like but i never found as mind blowing as Napalm/Unseen Terror/Morbid/Entombed blah blah that are still circulating on CD.

the post said OLD were on the list for the other labels to re-issue and there were no takers, plus how many people who ask for CD re-issues buy the product from Japanese mail order anyway haha.

Oh dear, why is earche such a bunsch of pussy? come on and rerelease O.L.D., INTENSE DEGREE and the HERESEY/CONCRETE SOX split. I lost my original vinyl after a water flood in my appartement back in 1998...

Earache today is full of shit, but thanx for releasing the WORMROT stuff...

Just put the fucker out already!

A limited press of 1000- that can't hurt, can it? Add if possible the Assuck split tracks, maybe some Regurgitation stuff...

Just put out 1000 and call it good- I've had that since it came out on vinyl- in today's day and age, I can maybe find it online, but the sound is always total shit. Maybe even a total discography limited run.

I know Earache may be reluctant, because of the "juvenile" lyrics, but shit, it was 1987! We understand, we were all there once. The music, however, is top notch.

Spazztic Blurr was pretty dumb, and their music got lost in lots of mindless riffing; OLD on the other hand had some serious talent in Plotkin, who did everything, essentially.

With all the "hiccups" Earache has suffered over the years (Spazztic Blurr, Lawnmower Death, Sub Bass Recrods...) I can't see why OLD is such a huge deal for you guys!

And while you're at it, when are we ever gonna see Sweet Tooth on c.d.? Obscure but a great album!

Very nice to find your blog. Also very interesting to read about a bootleg of the debut that I supposedly did myself...which is totally untrue of course. Like you, I don't have much interest in re-releasing it as I prefer to focus on the future.

My contracts for the album state that the rights returned to us 7 years after the release - is there some reason you feel you still own the rights to it? Just curious.

We need Old Lady Drivers digitally. Also, we need the songs on your 1990 promo cassette Rape, Carve, Smoke . . ., Urine Love, and Grrramps released in some digital format. It's important.