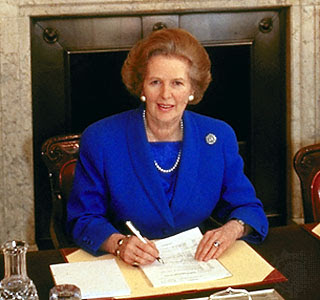 Question: Is it possible that without the young enterprise scheme earache wouldnt have existed? ive read in a number of books that it was one of the key reasons why indie labels started to pop up in the 80s. Alan Mcgee of creation records said that without it his label wouldnt have formed as he would have been in the job centre not doing label stuff! From:

Answer: Yep- you can thank UK prime minister Maggie Thatcher for the existence of McGee's Creation Records and Earache Records then, thats a fact! Because it was her Government which introduced the Enterprise Allowance Scheme- basically a way to reduce the shocking UK jobless figures at the time, by encouraging people off the dole and into running their own a business.The jobless figures were a politically sensitive issue back then, as now, and Governments would try anything to reduce the number claiming benefits.
It enabled people to become self-employed and in control of their own destiny- remarkably, The Govermnent even paid your business 40 pounds a week for the first year to help you along..but you had to stump up 1000 pounds of your own money to show it was a legit enterprise and you were slightly commited to actually running a business. The take up was huge- nearly every label i knew in that era was formed that way, COR records, Rise Above etc. It was really successful because it offered a way for many would-be musicians, comics, designers, arists etc to get the jobless tag off their backs and so have time to concentrate on building a business..it was'nt just for budding record label owners, anyone could join.
I don't know if a similar scheme exists right now in UK to give a leg-up to budding entrepreneurs, maybe the lottery funding is the current way for new budding labels owners to get investment, I dunno?
Posted by Digby at 1:52 AM