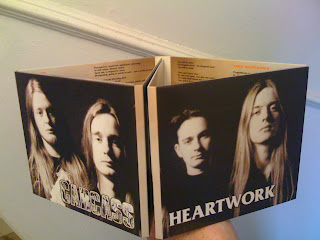 Question: Hey guys.
I\'m 16 years old and live in the birthplace of metal, Birmingham, and I have a 98 Cd strong Earache collection, spanning Sleep, to Morbid Angel, to Carcass, and newer bands like Evile and Municipal Waste (I have the original, bonus track and green case edition of their latest LP).
Here\'s my question-
Would it be possible , at some point, to do an Earache classics series in a cardboard , multi panel deluxe edition, in a similar way to the Carcass re-issues?
I was thinking that some timeless, 5* star albums need re-introduction to the newer generations, ie. Sleep\'s Holy Mountain, Blessed Are The Sick by Morbid Angel and even undervalued masterworks like From Enslavement To Obliteration by Napalm Death and Wolverine Blues by Entombed.
I think that the Swansong Dualdisc package was a prime example of how special editions needn\'t be chock-full of extras, when the special editions are of solid , timeless albums. I\'d have bought it for the deluxe packaging alone.
To summarise, I just think , in a generation when a classic \"metal\" album is made of the basic chug-squeal formula, there needs to be a modern day appreciation of classic bands, and what better way to do it than fancy, deluxe editions of Earache\'s share of pioneering albums?
Thanks for your time.
Ross. From: paintyourface@hotmail.co.uk

Answer: Well first of all Ross- cheers to you for buying so many Earache cds- we really appreciate your loyalty-I'm glad you like our stuff!.Secondly, you're not wrong about Birmingham being the birthplace of heavy Metal- its a proven fact.You should get yourself down to the 'Home of Metal'events taking place in coming weeks to see original artworks and artifacts from Black Sabbath, Judas Priest, Napalm Death,Led Zep etc being exhibited in various Brum galleries.Its free to get in.

Thanks for your kind words on the packaging of the CARCASS deluxe dualdisc editions...yeah we think they are great, they fold out over and over again don't they?They contain tons of extra artwork and feel lavish as hell- we wanted buyers to feel like they got their money's worth!We have noticed how the fans, like yourself, have appreciated them, because they sold spectacularly well...so you can be sure we are considering doing more back catalog re-issues in the same lavish style, with DVD added. Blessed Are The Sick is on our list to do- we have to interview the band first though.
Heres the greatest heavy metal band of all time playing the best Heavy metal song of all time, which contains the best HM riff ever written:

Cheers for answering,
and if I could ask for one album to be deluxified in a way only earache can do it,
it'd be Sleep's Holy Mountain.