Lawnmower Deth and Bullet For My Valentine 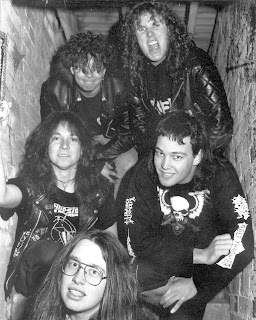 
Answer: Earache's 90s madcap thrashers Lawnmower Deth reformed for a one-off show supporting BFMV at London's Alexandra Palace a few months ago.Reason is that the long standing tour manager of BFMV is the ex- LD guitarist and I guess he either bribed or dared them into it!The band were incredibly rusty and have barely played their instruments in a decade but pulled off an amazing set, full of crowd participation led by singer Pete Lee - this was always their trademark and strong point.We hear rumours of a summer show being lined up for them in a tent in a field next to the village of Donington, Notts.

Witness some of that ol' lawnmower "magic"- 3000 snails in London.

Except that Donington is in Derbyshire...!