Deep Wound an influence on grindcore? 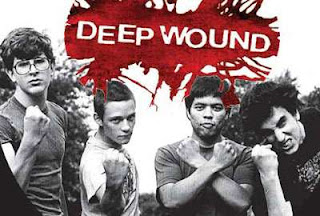 Question: I was reading in choosing death about how Deep Wound was one of the backbones of grindcore, im curious as to whether you agree with this or not? im curious as J Mascis acutally plays down Deep wound as a childish hardcore band from when they were kids ( im guessing dino jr has part reason for this), im just wondering should they really rank as highly as choosing death rate them being as you were there? From:

Answer: There was nothing that sounded like grindcore until it arrived, but all it really was, was speedy hardcore punk, down tuned, metallised and put through an accelerator.

So yeah I agree, at first listen Deep Wound aren't anything connected to grindcore, they predated grind by a few years, and were simply a teenage hardcore punk band.I personally used to love their first 7inch because I was always seeking out the fastest, rawest, gnarliest of new bands.The 7inch was a rare gem which had pride of place in my record collection, so I used to like showing it off, so used to copy it for everyone.

The opening track 'In my Room' boasted hella speedy chaotic drumming, courtesy as you say, of a 15 yr old J. Mascis.

They deserve their brief mention in Choosing Death, but I would'nt say they were the backbone of the scene, far from it. They did show the upcoming generation of what drum speeds were possible. Hardcore punk boasted a lot of ultra fast bands, and i used to love them all- faster the better.Faves were the DRI first EP 1982, and even the Dead Kennedys In God we Trust Inc record from 1981 was incredibly intense and speedy for its time.