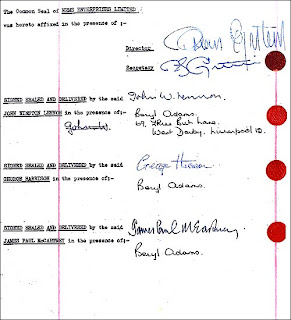 Question: When you first sign a band what are the first things you do for them, say in the first 6 months or a year? Do you make a special attempt for them to get noticed or just let time take its course so to speak, and what do you find most effective in bands furthering their fanbase and 'getting their name out'


Answer: It's hard to fully explain what happens when you sign to a label like Earache- and its not much different at the other main metal labels. The main change once the deal is inked is the surge in the level of expectation of the band, by the label.You are expected to become a major breakthrough artist within 2 albums.To say its a competitive environment is a gross understatement.Momentum is the key thing, fast rising bands gain everyone's attention, and are accorded the most praise.Most people's attention span is miniscule, so the way to get noticed is to be constantly visible and in people's faces.Any new band is a major undertaking for a label.

Some labels we know will immediately assess the skill of the players in the band, firing the weakest, least committed member(s) and demanding replacments. Its not unknown for labels to insist the band even change their name, especially if another previous band has the same or similar moniker or has already got the URL.If someone else comes up as the first result in a Google search, its not good.

My label Earache wouldn't go this far, but I'm basically pointing out that your casual question about "allowing the band the time to take its course" is pretty naive. From the moment you are signed, it gets very very serious. Its simply a change in attitude, thats all- unsigned bands have it easy, gigs can be good or bad, its not a big deal, but once signed there is the expectation from the label, and indeed everyone within the industry that you'll be a success.

History is full of talented, great bands who never made it, its often because they simply lacked enough drive or ambition. Labels are not used to promoting failure- at Earache you'd be given sort of regular pep-talks in the form of - here's your stab at a chance to forge a music industry career,but only if you follow the relatively simple career advice. In short - its write great songs, and go tour them, tour them some more, don't split up in the process, cos its gruelling and hard work.Then repeat.

Unsigned bands have no clue about the amount of money spent by labels- medium sized Indie Metal labels can routinely spend a minimum of £100,000 and often more on each new band over the course of the debut and the follow up.The major labels like Universal/Sony/warners/EMI often splash out £1,000,000 per band, but these labels mostly stick to indie, commercial rock, RnB, dance or pop acts.

It is possible nowadays to raise money from your own fans, or future fans- sites like Sellaband.com help you raise the money, and lets you keep all your rights, though they take undoubtedly take a cut out of the proceeds received for their work. Promising bands can raise serious money, which is not a bad thing,you could even say - who needs a label? What is missing is the expertise, knowledge and career guidance which labels like Earache offer.Sure, newbie bands now have the means to raise capital, but the industry is infested with well-meaning-wannabees, complete fantasists and a few outright con-artists, who can easily drain all the money the fans gave you away with false promises and exaggerated claims, and no results. Its tough knowing who to trust.

As for spending the money, the actual recording the album is often the cheapest cost, most of the money labels pay out goes on touring the band, because in the early days of a career the gig fees paid to openers are tiny, often zero, but the costs involved in travelling around say EU or USA are extremely expensive.Touring USA for the first time for a new UK band can cost $25,000 easily, but the way to soften the financial blow is to get skilled at making and selling great merch. This is the secret to constant touring on a global basis - its paid for by merch.

Going up touring ladder circuit and rising up the bills of tours or getting festival slots takes great skill and involves the services of a major gig agency.I reckon its harder to get the bigger touring agents involved in new bands than score a record deal, the agents are too busy selling tickets with their main top draw acts to be using valuable time helping out new bands get started on the ladder.

What could be seen as Old-school type promotion activities cost a lot but do gain massive visbility.Money is spent on gaining radio play or videos on TV channels and press features in the main magazines - this is expensive but gains the band credibility, fast. Most of the money spent by labels is with the major bricks n mortar record chains.Unknown to most outside the industry,they charge outrageous fees to the label for the 'privilege' of a debut album to receive some paltry racking space in their retail outlets across the USA and EU.Even going into the A-Z section costs a packet. They maintain their floor space is valuable real-estate and it costs money to devote it to an unknown band.Bricks n mortar chains are struggling so charging labels is how they survive.Even internet retailers have cottoned on to the scam, and now charge labels for extra visibility and special placements on their sites, even tho hosting a few extra pixels on a webpage is almost free.

Digital and the internet is changing everything, very fast though.We advise bands to communicate with their fans more, much more. In this age of facebook, twitter, youtube and other free social networks, it makes interacting with fans a cinch. Some bands we know tweet, blog or bulletin on literally an hourly basis. Jamey Jasta from Hatebreed sends 25 tweets per day for instance. Doing a monthly newsletter, which was the the 90s equivalent,marks you as quite outdated. We also expect bands to also make and post video interviews on youtube regularly explaining to fans whats happening in their camp.A web enabled cameraphone and some basic video editing skills are important.

The pay off of course, is the prospect of a lucrative music career.By lucrative I mean the members can live OK off of their music.If you want the champagne lifestyle, you are reading the wrong blog dude- you'll need to be playing RnB or Pop for that.

It's true that lucky breaks do play a large part in breaking a new band through- but as they say in this industry, you make your own luck. New bands do come through the ranks into metal stardom on an annual basis,but its only maybe an handful each year.Recent examples might be Bring Me The Horizon or Gojira.Both were newbies even a few years ago, but by their sheer hard work and the talents of their respective labels (and managers) they are now packing out venues and both should enjoy long and fruitful careers.

I wish you well with your band dude, hope this gives some pointers how we do it, and doesn't scare you off.
Posted by Digby at 12:40 PM

Fantastic post. Thanks for taking the time to explain the process in a clear and realistic way.