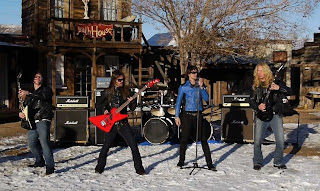 Question: hey Dig this is the time of year when magazines pick the cream of the crop for the coming year.So, have you got any tips for next year, seeing as you are involved in the music and have an ear to the ground on developments.

Answer: Well I never saw Lady Gaga coming in 2009, thats for sure, even tho her album The Fame became one of my faves of the past year. For Hip Hop 2010 will be all about Canadian DRAKE, on the Young Money Label, apparently he made his demo for $400 and the leading Hip Hop producers fell over themselves to work with him, offering staggering amounts, hes the new Eminem. DRAKE last month had 2 singles in USA top 10 so its already a fact, he's a major name in waiting.Hear why here:

In techno/dance scene, its all about the inexorable rise and rise of Dubstep, MAGNETIC MAN is the stage name of a teaming up of two of the biggest DJ's- Skream and Benga. Watch for this name all over the festivals summer 2010.

In Rock/metal I reckon our own Los Angeles traditional heavy metal band WHITE WIZZARD will rise through the ranks and by the years end could be a major force, but that might just be wishful thinking, I dunno. Not many people know the band had a major split in the ranks, so bassist/mainman Jon Leon seemingly pulled off the impossible, and recruited an even better band, topped of with an incredible new HM singer with 3 octave range, by the name of Wyatt Anderson.Here I'll post the new video for title track from 2010 album Over the Top when its ready:
The video was shot on the vintage set of many old western movies- the location still exists, deep in the California desert at Palm Springs, but almost unbeleivably the band found the set was covered in snow when they arrived.