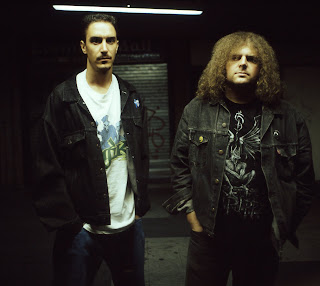 Question: I had to ask about this project ( and i chose the word project wisely), what are your memories of blood from the soul? Im only wondering as I dug out a copy of their album recently. for me the band is comparable to epitaph band error except a decade before hand in that its a meeting of a hardcore guy, a metal guy and a industral musican. On a personal level I belive that record betters anything fear factory were doing at the time, and almost serves as a companion release to some of the material godflesh were releasing at the time! From:

Answer: Yes Blood from the Soul was most definately a short-term project, it was'nt a real band. It was the brainchild of Shane Embury (Napalm Death) who hooked up with Lou Koller of Sick Of It All- they had met on tour and became friends.The idea was to quickly get in the studio and produce an album during an extended period of downtime from the Napalm Death touring cycle. Shane being a highly creative dude open to other genres, (remember, death metal and HC just did not mix at the time) and the newest technology (samplers/drum machines were big at the time) meant he could indulge his wildest creative juices. It was a helluva innovative project on many levels.

To be perfectly frank the reason it was formed was so Shane could earn some income because by this point in 1992 the Napalm death members were full time professional musicians and any downtime was not helpful to their finances. I vividly recall the meeting when their manager explained their grand plan to me - all the Napalm Death members will use this downtime to go off and create their own projects. I was pretty horrified by this, as I have a long held belief that project bands are a waste of time really, because no-one 'cept the most die-hard fan of any band buys into them. Being mindful not to restrict the creativity of the members, we agreed to fund them all anyway, even though to my mind it was foolhardy.

Looking back, I reckon the runaway success of Terrorizer was a motivating factor.This appeared like a project but was a real band reactivated to record their debut after splitting up, and contained members who later joined Morbid Angel and Napalm Death. Also around this time Fudge Tunnel founder Alex Newport hooked up with Max Cavalera to form the Nailbomb project,which was released to great acclaim on Roadrunner and sold a lot of copies. Every project seemed to be successful, with minimal effort, so project mania took over!

Earache and Roadrunner did a musician swap- in return for our allowing Alex to record with Max, Napalm's Mitch Harris hooked up with Obituary's Tardy brothers and recorded the Meathook Seed project. Shane did his thing with Lou. Not many people know this but serious plans were also made for the second Terrorizer album to get recorded but the schedules of Morbid Angel's Pete did not match Jesse's so this idea was shelved. Also the Morbid Angel management were not convinced it was the right time to do it.

The only Napalm member who did not embrace the project mentality was Barney Greenway. In hindsight maybe it was this project era which made him estranged slightly from the other guys, well, that and the groove metal influences slowly but surely coming into play. Barney began spending his time hanging with the ENT guys.A few years later in 1996 he'd dramaticaly walk out of Napalm during a recording session, to join ENT for a short time, recording vocals for them instead on ENT's Damage 381 album.
Posted by Digby at 1:14 AM