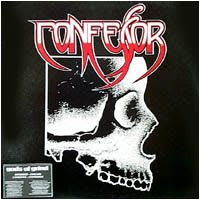 Was Confessor's self titled ep ever released on cd in the slim jewel case form like all the other ep's at the time or just through Relativity/Earache in regular jewel case? Also, was Unseen Terror's Human Error released on cd before the 2001 reissue. Thank you kindly From: jared_hynes@hotmail.com

Answer: Confessor's EP was made on slim jewel case, released in UK on Earache in 1992, yeah. As for Unseen Terror, it was not released on CD anywhere until 2001. Read an interesting interview with Confessor here.
Posted by Digby at 10:05 PM

UNSEEN TERROR was released on CD in 1993 in Japan through Toy's factory.