How do the original 80s Thrash bands feel about the new crop? 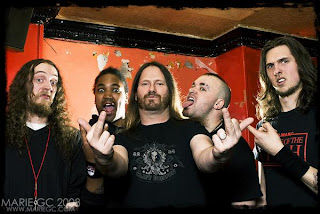 Question: Since its been a few years in i thought id ask this. what do you think the attitude towards the new wave of thrash has been from the old guard? ive noticed that their main champions of the old guard have been Robert Caggiano of anthrax and also scott who was in stampin ground, however im guessing this is because both are producers and so have regular contact with new bands all the time, also from rob's point of view at 33 he's actually the same age as some of the guys in the new wave of thrash bands. im just curious as to what you have noticed from a label's point of view. From:

Answer: Short answer is- extremely supportive. Thrash, young or old, is a genuine community. For proof look at the amazing level of support given by the veteran acts to the Mike Alexander (RIP)auction. Slayer invited Muni Waste onto their recent December UK tour.It was a great honor, as Kerry King has been very public in his admiration of the new Thrash bands, but Muni had to decline, as they were already committed to touring USA. Likewise Rob Flynn of Machine Head invited Evile onto next months (Feb 2010) Euro tour, but again they had to politely decline as they had their own headline tour going on.

This blog has been writing about New Wave of Thrash bands since mid- 2006 when the scene barely even warranted a blip on anybody's radar. Municipal Waste had a couple of records out but bands like Warbringer, Evile, SSS, Bonded By Blood, Gama Bomb & Violator were still touting demos, or self-released CDs.

In January 2008 Earache released the Thrashing Like A Maniac compilation, which was our attempt to showcase the upcoming bands, because I was fascinated by the youthfulness and energy of this new set of mostly teenaged or early 20 yr old bands who were influenced by the retro sounds of the 80's thrash scene, and wanted to recreate the original style for the modern day.

I also admired the guts of these bands because to actually get up on stage and play Thrash in bars and small clubs to an audience mostly unprepared for it, took an enormous amount of self-belief. Early on, Evile were once a last minute addition to the billing of a festival of local Nike-wearing Emo/screamo bands in Bradford.Playing unannounced they endured a hostile reception, the crowd- of about 8 people- were mocking the "dated" sounds, giving them the finger from close quarters. Charged up, they played through a totally ripping set, sporadic headbanging had even broken out by the end of it. They simply had to perform to impress the watching Flemming Rasmussen - who had flown over to check out the band prior to recording their debut.

Now as we enter 2010, its a different picture. Many of the new schoolers have albums out, and a few just released album number 2 in recent months, most of them are forging careers in their own right. A whole glut of Thrash-y albums on other labels have been released in the last 12 months.Even the most dismissive of pundits must admit now that a thriving scene is gradually taking shape.Thrash is a sought-after tag now, even mid-tempo Death/Black metal bands are getting dubbed "Thrash" by confused journalists, simply on account of having occasional 'thrash' tempos in songs.

You asked about the opinions of the Thrash veterans to all this - I'm glad to report, its very very healthy, many of them look on approvingly. In fact its more like a mutual back-slapping/appreciation-fest. Many of the old guard noticed quite quickly what was going, and instantly took a very close interest in the new bands. I guess they were fascinated by this new generation of young 'uns, half their age, who have revived and re-activated what was, lets face it, aside from the 'Big Four', an almost stagnant scene. The new bands breathed new life into Thrash, and in many ways have in turn re-energised the old guard into making return-to-form albums aswell.Like zombies, they really did bring the old-stagers back from the dead. How else do you explain the difference between St.Anger and Death Magnetic?

Many of the veteran thrashers go out of their way to support the new bands. Scott Atkins (ex-Stampin Ground) was maybe the first one to get exposed to the new acts,as a procession of newbie young Thrash bands - Gama Bomb, Mutant, entered his Grindstone studios, and emerged as polished acts, boasting world class productions to their name.

First off the blocks with a genuine helping hand was probably Dave from Gwar. His band kindly took Municipal Waste out on a full US tour early on, which exposed the band to more people and boosted their profile no end. Gary Holt from Exodus took out Evile for a full EU tour, the two bands got on famously (see pic top).

The veteran German bands have offered amazing support - Kreator took Municipal Waste out on a US tour, and Eviles first ever USA touring stint will be as Kreator support in March 2010, closely followed by Overkill tour of US aswell.

Schmier from Destruction enlisted Ol Drake as stand-in for a festival appearance, which I think clearly shows the level of admiration between the old and new schools. 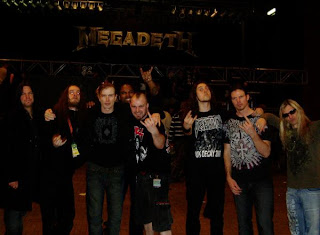 Perhaps most famously, a couple of years ago Megadeth took Evile out on a full EU tour and this generous act boosted the bands profile across Europe enough for the band to headline out there, with Warbringer, right now. See pic, Megadeth & Evile.
Posted by Digby at 10:30 PM