Answer: In short, the only censorship the band received was from us, the label. It was a sort of mild 'self-censorship' because we both wanted the band to succeed and sell lots of records and so band and label agreed to tone down the more obnoxious elements of the band to try to acheive this aim. By obnoxious, I mean obnoxious to the general public, because actually the offensive and attcking style of the band was to me, and the rest of their underground fans, its main appeal.

ANAL CUNT recorded 5 albums for Earache in the 90s, from their debut full-length 'Everyone Should Be Killed' in 1994 to their final album for the label, 1999's 'It Just Gets Worse'. Unlike nowadays with the internet, back in the dim dark age of the mid-90s the only way of distributing a bands music and albums in any quantities above a couple of thousand or so (which is about the limit of DIY mail-order or selling at gigs) was by a physical release distributed via the high street retail CD chains. Earache really thought AC could sell a significant amount of records, maybe tens of thousands, as we'd done exactly that with similar grindcore acts a few years beforehand.

The head buyers at the 90s era record store chains held all the power and made all the decisions regarding the type and style of music they would stock in their chain of stores, which was fair enough, since they owned their stores they could decide what to stock in them after all. Because of this- America had probably a couple of dozen, UK about 4, often anonymous "buyers"- one from each chain- who were tasked with deciding which if any new records were going to be made available in the record racks for fans to purchase each week, and if they didn't think your band would sell, you were toast.

It was far from automatic that any new metal punk or indie band would get selected to be racked in the stores, and metal labels like Earache and the like would routinely have to go the extra mile to pitch each new release to the buyers.All they cared about was filling the store with the fast selling Pop mega-sellers of the day and so bizarrely the buyer would often not even be a rock fan, sometimes it would be the classical or country buyer who was roped in for the tricky task of selecting the right metal releases for the chains group of stores in the coming weeks. It was a joke, but one we had to put up with.

I'd been in contact with Seth from the very early days of the band from their late 80s inception when I helped distro their classic 88 song debut 7inch EP in the UK. Seth impressed me with his wit and creativity and single-minded pursuit of extremity probably best highlighted by their stunning and record breaking 5643 Song 7 inch EP, which remains a world-record to this day.

I was a big fan of the band and watched them develop from afar while Earache itself exploded. By the time of the early 90s the original grindcore scensters had come to regard AC as a sort of quaint joke, because they hadn't incorporated metal into the grindcore mix like the Earache bands did, and so hadn't become a huge selling band like many of their grindcore contemporaries. Earache did eventually come to its senses and sign the band in 1994 - but only after their demo for us 'Morbid Florist' was picked up and released by Relapse. I signed them mainly because they were one of the only "true grind" originators left, and Earache wanted to support that.

Back then, AC had no lyrics to speak of and no song titles- just calling them "some songs" or "hardcore song" or "more songs" and the such like.After signing with Earache we kinda persuaded them to 'play the game' a little bit by actually adopting song titles. This was so they could appear to fit in with the expectations of the record Biz at the time- we explained to the band how record retailers simply would not take an album seriously without song titles, so the band reluctantly agreed. Hence for the first time in their career actual song titles appeared on the debut album. 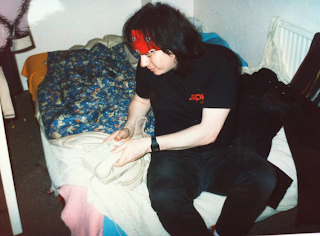 In the early days, AC song titles were side-splittingly funny, accurate, and clever observations of the music scene in general like, "MTV is My Source For New Music" or the grindcore scene in particular "Extreme Noise Terror are Afraid Of US" and "I Liked Earache Better When Dig Answered The Phone". Loads of fans- including me- loved the band because of theses witty and mildly confrontational song-titles.

Likewise a ton of people got into the band through their gloriously ramshackle renditions of cover songs like Bee Gees' "Stayin Alive", "Unbelievable" and " Theme From The A-team " etc.

They even took a break from their noisy output to flip the other side of the coin and release the acoustic 'Picnic of Love' 7inch, defying all conventions and taking the piss in a magnificent way.

During the course of 5 albums on Earache the band explored every taboo subject and slowly but surely upped the ante with each release, coming up with titles that were even more obnoxious and confrontational.By the final album we even had to censor titles because of concerns about being sued for libel.Eventually AC hit on the subject that I personally can not stomach and which sets off alarm bells in the record biz, namely Hitler. 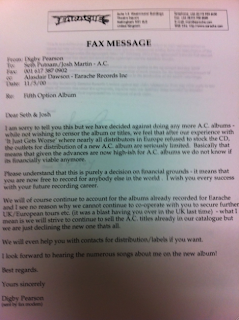 The bands proposal for album 6 was all about Hitler (even though I don't believe the band are actually Nazis) which to me was simply beyond the pale so we decided not to work with them anymore.

In reality the bands charm with fans was on the wane aswell and their CD sales were down a lot and so we parted ways and dropped the band. This did not phase them in the slightest, and they promptly reverted back to being a DIY outfit. 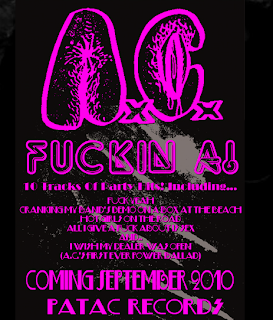 About 6 years after parting from Earache I heard reports online that Seth had suffered a drugs overdose and subsequent coma- but luckily he survived and eventually recovered enough to take AC back on the road, still being obnoxious and causing trouble wherever they go, just like the good old days.

Theres even a new album due soon on new label PATAC of Cock Rock ballads called "Fuckin' A".
Posted by Digby at 11:09 PM

Heh, I saw AC live a year or two ago, and it was a sad affair. Tired dudes huffing around, with one of them trying to be offensive, and most of the crowd not caring. Their opening band F*** the Facts blew them away that night.

I remember seeing the Morbid Florist CD in my local record shop and couldn't figure how it made its way there as they were selling punk, rap and alternative stuff, mainly. I asked the clerc to play me the CD before buying it and, after terrorizing the whole store for 5 seconds we both agreed of putting it back in the case and leave it on the tablet. I remained there until the shop closed, two years later...

I still wonder how well that Hitler album would have done on Earache. It's funny to see people reacting so much to Nazis, Hitler or the Third Reich but allowing bands to write about any other conflict without questioning the intentions...

AxCx got censored by the retail outlets, Earache was simply the executioner. Josh and Seth(knew Josh first) are good friends of mine, or maybe im just some gay whos house they stay at on the way home from new york to boston lol. Anyway im in the UK now and hope the summer tour actually happens and they dont get turned away at the border !!!!!