Occult Doom- the missing link between Doom and NWOTHM ? 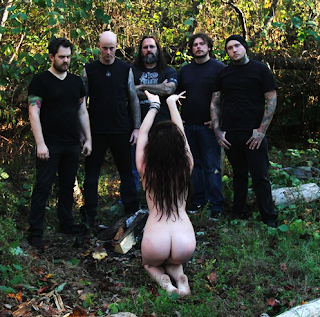 Question: Since you've recently signed hour of 13, I have to ask what do you think of the new wave of occult doom metal? Being as HO13 and rise above's Ghost as well as Portrait, It could be argued that Jex Thorth and The Devil's Blood also fit into this category, bands that are doing their own thing independently however when viewed together you can see the attachment bands who have obviously listened to Coven, Merciful Fate and Candlemass as well as your usual nwobhm bands. Do you see this being as a sub thing to the nwothm or possibly becoming its own thing? From:


Answer: This is a great question and I really think you have hit upon an amazing revelation, namely that Doom and NWOTHM are closer bedfellows than anyone might have imagined. They draw from the same source material, after all. I'm into all the bands you mention.

First some history-the originators of the Doom scene as we know it - Saint Vitus, Trouble, Candlemass and Pentagram etc - more or less played a sludgier Black Sabbath style so its no surprise that the soul of Sabbath has always been bubbling under the surface in many of the modern-day Doom bands.

For some time Doom was stuck in a vortex of snail-paced Brontosaurus riffs a la Electric Wizard, but lately the shackles have come off- and a new breed of Doom bands are now revelling in the sounds of the 70s -Psychedelia, Acid Rock, and NWOBHM influences are coming to the fore and fans are loving them for it.

Though these bands you mention are independent of each other, often from different continents, what they have in common is they really seem to enjoy playing with a new-found freedom to experiment within the Doomy framework, and actually to 'rock out' big time. This does make them pretty similar to the NWOTHM bands which have sprung up in the last couple of years.In fact The Devil's Blood is mostly made up of former members of Dutch NWOTHM act Powervice (who appeared on Earache's Heavy Metal Killers compilation) so the connection is totally obvious. There's definately a few parallels with the NWOTHM bands, and even with the Death Metal scene. Ghost is made up of members from Repugnant, and also Adam Zars of Enforcer also plays in Tribulation. As you can see, many of the musicians in these new bands, do have a history in the Swedish Death metal scene.

Doom fans know that record labels like Lee Dorrian's Rise Above, Greg Anderson's Southern Lord and even prime tosspot Rich Militia's Miskatonic have long been the purveyors of quality Doom in all its forms. Rise Above were responsible for the career of Grand Magus, and its that band which I think should take credit for taking the giant step and expanding the Doom palette into more NWOBHM-influenced realms.This started with 2008's Iron Will album.

Over the course of 4 consistently great albums Grand Magus came to define what a heavy metal-oriented Doom band was all about and eventually scored a record deal with Roadrunner into the bargain. You could also bring London's Orange Goblin into the equation too I suppose -again a Rise Above band- even though they were known as more of a Stoner band.

Check em both out:

As for the subject of your question- Hour of 13.Yes they are a new signing for Earache and could best be described as Occult-themed, Doom-laden Heavy Metal - yeah, err that just about covers all bases doesn't it? Ha Ha. Vocalist Phil Swanson previously sang for SEAMOUNT which was a more Traditional Doom project band with plentiful rockin' moments- we had our eye on them for some time but never made an approach.

To many people hearing HOUR OF 13 the first thing they mention is the noticeable 'Blizzard of Ozz' era Ozzy or early Judas Priest vocal style, and its Phil's powerful yet melancholic croon which attracted us to HOUR OF 13.

To get a feel for what I'm talking about- just listen to 'Naked Star' from the forthcoming re-release of 'The Ritualist' due out in January on Earache. Its fair to say the band exist right at the nexus of this Down-tempo/ NWOBHM-influenced scene, if indeed such a scene exists. Time will tell.

HOUR OF 13 - Naked Star by digearache

Heres some songs by the leading Occult Doom bands that you mention in the question. All are fast making waves with critics and fans.

A little harsh on Electric Wizard - they always mixed in acid rock and psychedelia in with their doom.

That's one of the things which was so great about them. You can even hear the influence of bands like Hawkwind in their music.