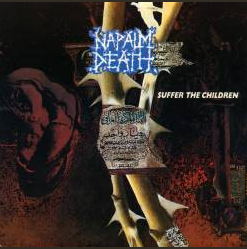 One of the most unexpected things that happened to Earache has to be "Suffer the Children" in ADIDAS commercial. It seems almost unbelievable today to have that kind music in a sports ware advertisement. Can you shed some light how this cooperation become possible? Was it ADIDAS's idea? Has any other company asked you about using some of Earache's bands music? Also, concerning Napalm Death's suppose anti-corporation message, how come they allowed one of their songs to be in a commercial for one of the biggest clothing corporation in the world? It seems like a huge hypocrisy. Thanks a lot! From: pletnia@gmail.com


Answer: Short answer is that Earache did not give permission for the use of Napalm Death 'Suffer the Children' in the Adidas TV commercial, but the band's management did.

Here's the clip, filmed in 1995 when Kobe Bryant was a rookie player but was expected to become a huge star of the NBA. In 2010 as part of the LA Lakers team,he's reputed to earn in excess of $40,000,000 so you could say the prediction came true.

Yes you could call it hypocritical if you want (I take it you don't wear Adidas trainers yourself, then?) given Napalm Death's proclamations before and since, but the band at the time of the mid-90's were needing cash urgently as the sales of their albums were declining rapidly. The problem was the band's manager (who looked after their affairs from 1989-1999) had committed to pay the members each a monthly salary and the money was running out.

Out of the blue came a letter from a leading London Advertising agency regarding the use of Suffer The Children for use in an Adidas commercial. This was unexpected but I don't recall myself and the manager ever discussing the 'hypocrisy' of working with Adidas- its hardly McDonalds, just a maker of cool clothes and trainers- and it seemed a nice windfall and bonus to the band and label coffers.

I decided that if Earache was to 'sell out' it should be for a substantial amount of money and we received advice about how much money to ask for the use of Earache's music in a global TV campaign for a leading brand. Over $50,000 is typical so that is the amount we requested, which did not go down too well.

Adidas rejected the request and instead commissioned a music recreation company to re-play the music- these are companies that can hire musicians to re-create any song with the specific purpose of avoiding payment to the original copyright holder. Almost unbeleievably, the version of the song in the advert is not by Napalm Death (!!) but by a bunch of hired musicians and consequently neither Adidas nor the Ad Agency had to pay Earache anything. You can tell the difference if you listen closely.

I was gobsmacked because I'd never even heard of such companies. They are one of the most secretive parts of the music industry and hated by all - but I hear those companies do good business for dance labels who need to remove or recreate samples from hit records.

The publisher of that particular song is Napalm Death themselves so the management on behalf of Napalm Death must have done some kind of deal to allow the song to he used. NOTE- the song ownership (ie the writers) is different from the recording ownership (which is what Earache owns).

Later we found out that the TV advert was destined for airing only on Canadian TV so it turned out our request for such a large payment spooked off Adidas, because we were mistakenly told it was for use in a global TV campaign.

Earache has never been approached about using music in TV adverts ever since, but its definately something we'd welcome, and would consider on a case by case basis.
Posted by Digby at 1:37 AM

AMAZING STORY!!! I wasn't expecting any of it! Dig, you should seriously write a book!

Didn't Sega use John Zorn in adverts back in the day?