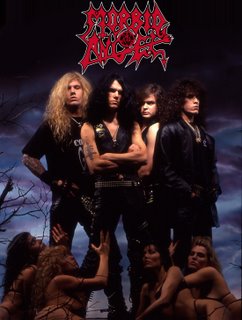 Question: Can you explain the entire remastering of the first two Morbid Angel albums \"Altars of Madness\" and \"Blessed Are The Sick\"? The sticker says 24 bit remaster, what is that? Also, can you personally tell a difference symphonically from the original cd issue? From: usmc2621@hotmail.com


Answer:Both albums were re-issued a few years ago and were indeed remastered digitally to boost the sound levels -we thought the albums were showing their age and could use a modern upgrade so they sounded like more contemporary albums which are usually louder compared to stuff released 16-17 years ago.We used the now commonplace digital mastering software operating at 24 bit resolution whereas the original CDs of both were originally mastered from tape, in analogue environment, during late 80's early 90's.

For the new remastering we actually made a 24 bit remaster from the very original mixdown tapes but it sounded scarily different from the already released CDs fans are used to,instruments came out sounding much different, so for this re-issue,we resorted to remastering from the originally released cds.

We think the results are - a better,clearer, louder sound. The irony in all this is that Cds themselves are 16 bit technology, so the 24 bit mastering process is a bit of a misnomer.The main improvment is a louder sounding CD.
Posted by Digby at 11:34 PM

This is a really old post, but I felt compelled to still comment. Why wouldn't you get what was on the mixdown tapes, no matter how "shockingly different" the instruments sounded? Isn't the "truth" better than fiction when you are doing a remaster?