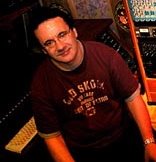 Question: is the \'slaughterhouse studios\' still in existance?
napalm death recorded the mentally murdered ep there and bolt thrower did war master there, i just love the sound on those albums.
cheers From: Unknown.

Answer:In the late 80's I booked Napalm Death into this unknown (for metal) studio in Driffield, a small town in East Yorkshire, UK -based on Mick Harris rating the clear cut sound/seperation on a recent album by The Sundays, a successful UK indie pop act of the time.A few other notable Northern Indie rock acts had used it too- Sisters Of Mercy etc.It was called Slaughterhouse Studios- built on the site of an old abbattoir- and it even offered bands the use of a house down the road where they could stay during the recording, it was the fist time Earache could afford any band such luxury.

When we showed up we met for the very first time the in-house studio engineer/producer Colin Richardson,who we all got on with right away.His friendly and unassuming manner and dedication to his craft was a refreshing change, as the only studios Napalm Death had been in before were pretty dismissive or downright hostile to the noise the band were making.Colin was different- he clicked with me when he casually mentioned he had engineered a record by a UK punk band some years previously while at another studio- Discharge's WHY? EP.Blimey! this fact alone made him a God to me and I knew I had the man for the job of creating Earache's brand of extreme metal, as the early Discharge sounds were and still are the earthshattering blueprints for extreme music, and Colin was instrumental in creating that sound.

Colin proved to be on the top of his game, and his expertise literally changed the labels fortunes as i booked a procession of bands up to Driffield- they would walk in average bands, taking the first toddler steps in their careers, and within weeks would emerge with World-Class productions to their name- he produced a good percentage of the first 50 or so mosh number albums, including Carcass, Bolt Thrower, Massacre, Fudge Tunnel, Brutal Truth- Hellbastard, Lawnmower Deth even( with fellow Slaughterhouse co-engineer Stephen Harris - who a decade later mixed U2's hit singles!) , and I made damn sure Colin was properly credited as Producer on those early albums even tho, with typical modesty, he didnt ask for such a credit.

By the mid 90's Colin was THE main man for extreme metal and he often chose to record at other locations- Chapel Studios in the village of South Thoresby,Lincolnshire was and still is his fave etc- Slaughterhouse kinda fell off our radar,bookings had dried up, and we heard the owner burnt it down one night as an insurance job.

The final album we had Colin produce was the Pulkas album "Greed" in 1998, but that was immediately marred by some shady business shenanigans between Earache and Colin's wife Lora (who became the acts manager) over the band's future.
Posted by Digby at 12:13 AM

Hi
My name is paul from glasgow and i recorded at the slaughterhouse back in 1986 along with my brother and the rest of the band BROTHERS OF CRAIG,colin also engineered our single and as you say was a pleasure to work with the way he jumped around that mixing desk was a pleasure to watch and his unassuming manner was a sheer delight.
We had a great three days down their that summer and it has lived long in my memories i have a good few photos from the time their that i am going to put on the web so if you like will pop back on and let you know where to view them once on,do you recall russel to and the wee pub THE FERRET AND SPROUT,anyway i did hear that the slaughterhouse was destroyed by fire some years back but im not 100% sure ans colin was as far as i know last over in the states working on movie soundtracks so good luck to him he deserves the success

P.S I think we were there just after Napalm Death.

My father is a sound engineer and worked at the studios in Driff I would imagine in the late 80's early 90's with the Sisters of Mercy and The Mission, his name is Pete Turner

We were Oh the Goats and we recorded there in "86 too. Had only found out about the accommodation after spending a night in our van with Dave Yeh coughing all night and Fat Tom squealing like a strange pig in his sleep. Me and Andy hardly got a wink. Anyhoo at end of first days work we took the blokes down the pub for a few beers and it got a bit messy- second night no takers. We recorded "Nastassia" and "Something I Must Do" both massive hits in the Uk, Europe and USA. In my dreams. Wildskel.

PS we were called Oh the Goats!