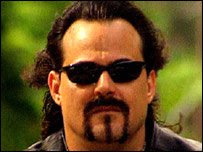 Question: I\'m looking for a Death Metal Special Report that starred Glenn Benton of Deicide. It appeared on tv once and I think it was produced by one of the following- Time, Discovery, or National Geographic. I want it as source material for a report for school. Thanx in advance for any help you can give me regarding this. From: brandylynlomax@yahoo.com

Answer:Try HERE for information. Also HERE.The program was made for BBC 2 in UK - called DEATH METAL MURDERS, as part of the "This World" series. Was later aired on DIscovery channel in USA.Its really hard to find any footage on the web-- maybe if any blog reader has it on tape, they might upload to Youtube?
Posted by Digby at 3:14 PM