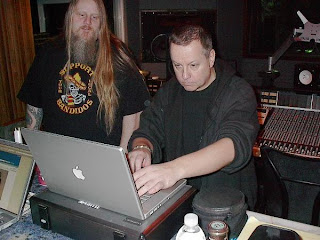 Question: Out of interest did earache suggest neil kernon as a producer to oceano? Im wondering simply because of neil\'s links to earache bands akercocke, deicide etc as well as bands like cannibal corpse, I thought it would be a no brainer since both are based in chicago . From:


Answer: Simple reason really- he wasn't considered because we'd already hired him to mix the Cauldron album so he was already booked up by Earache.

Neil Kernon is a top producer, we recommend all our USA bands to work with him all the time because his repertoire of productions range from platinum 80s metal (Queensryche/ Dokken) to classic 90s death metal (Cannibal Corpse), hes a veteran and a great all rounder who knows how to produce a wide spectrum of metal, and beyond. He's originally from UK so we have a connection there.He's also a fine fella to work with, can deal with Indie label budgets, delivers quality as standard, and has the patience of a saint when dealing with bands.

On the instructions of the band we scrapped his entire first mix of the Deicide "Scars" album.He'd worked on it for weeks, yet the band rejected it on a whim, going for a more 'live sounding' vibe.Neil accepted that, and did'nt mind at all- even tho his mix destroys the mix we released on CD.

For OCEANO we had to find a new guy and it was the bands suggestion to use relative newcomer Joey Sturgis at Foundation in Indiana. He'd only done s few bands, notably stuff for Rise Recordings (who manage him), so far, The Devil Wears Prada is his biggest album.
Boy, what an incredible job he did for Oceano- he worked his ass off for that band, day and long through the night (thats why most of the in-studio DVD footage is in darkness).We only had to ask him to increase the vokills and stick more of the sub-bass drops into the mix, but the end result on Depths is a slamming, concrete hard but slick production.To me, its a masterpiece.

See Joey producing Deathcore magic at the controls in this clip: