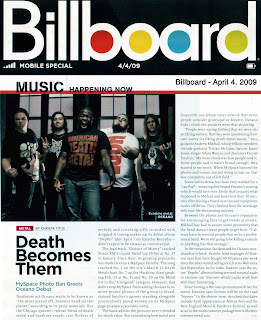 Question: why is it you think deathcore has caught on now when to be honest most of the bands appear to be second rate converge clones? From:


Answer: DEATHCORE as played by OCEANO is by far the most exciting thing to happen to extreme metal in a long,long time.I fucking love it cos its genuinely contemporary music- nothing sounded even remotely like it even 3 years ago, the scene is still in its infancy, and as you say- Deathcore bands are catching on everywhere.Its the next level of extremity, and its quite possible that the DEATHCORE scene could blow up to be the biggest extreme metal scene there has ever been.Time will tell, but I really think it could end up dwarfing the original 90's Death Metal scene, which itself was huge.

DEATHCORE is essentially a hybrid of the sickest aspects of 90's Death metal ( the Suffocation-style gutteral vokills mainly) and 90's Hardcore (the simplistic chug breakdowns) and even tho the bands play fast, the style doesn't have much emphasis on OTT speed. Lately, OCEANO has also added speaker-quaking sub-bass drops (a Hip Hop influence methinks) to the mix, which you need real hi fi speakers and sub-woofers to appreciate on their album "Depths".This aspect is missed entirely if you listen on laptop or ipod buds.

Purists on either side hate it of course, its not true DM and its not proper HC, its a real mongrel scene, but to me, as a fan of extreme metal for 20 years, its highly original and totally savage stuff.

You might have a point about CONVERGE tho- they could actually be the forerunners, because they were a hardcore band which had its fair share of DM influence, but they sound almost polite by comparison to todays DEATHCORE dealers.

More realistically the bands which are the forerunners might be JOB FOR A COWBOY, SUICIDE SILENCE and even BRING ME THE HORIZON, but they all boast a few other influences aside from pure DM and HC.
Bands like THE ACACIA STRAIN and WHITECHAPEL took things to a whole deeper of level of brutality tho, and they are the beginnings of the current DEATHCORE scene in my view.Instrumentally, the power and heaviness comes from playing 7 string guitars and 5 string bass- that set-up automatically produces a heavier, sicker sound.

You ask whats the reason why its blowing up now - its basically Myspace, and Youth. The fans are young, many grew up with the internet already part of everyday life, and are always online. These bands- which are the same age group- tapped into that.Its expected that bands be able to interact with fans 24/7 now, and these bands use Myspace as a natural means to keep fans regularly updated,and when I say regularly, I mean hourly!

Even as recently as 5 years ago, before Myspace was launched, bands would only interact with fans every 18 months or so, when a new album hit or when were out on tour.If they had a website, it was a pain to update it, and streaming music would cost a fortune in server rental costs. Myspace changed the face of the music industry, but it mostly changed everything about how fans expect to interact with their favourite bands.

Deathcore is not exciting, everything that deathcore is has been done far better by the artists they supposedly derive influence from--the true hardcore and death metal perfectors and originators. Deathcore can be good (The Red Chord is my only example) but most of it is just the bad from both worlds.

the DEATHCORE scene could blow up to be the biggest extreme metal scene there has ever been? HAHAHA... this sucks! Now, Grind/Death bands happened to not exist? This is another lame trendy pseudo metal-core scene, a bastard product of two authentic and true genres. Ah, and It's boooooring....

If you are saying you have a problem with a black dude on vocals, then you are a dick.

Hardcore has always sounded wimmpy compared to Death Metal. And now all these androgynous dickboys/shemales are discovering death metal and doing it wrong. Simple cause their scene has been clones of clones cloning other clones and got stagnant and had to jump off of thier failboat to try and catch one last breath before they grow the eff up. I don't buy it and I never will. It's a pathetic watered down mediocre talent. The sorta shit Century Media has been pumping out since it started. The sorta shit all those Devourment clones did in the early 00's. The sorta shit all the old black metal bands did in the late 90's and called it "norse core." Excuse me while I change my Possessed album. BAAAARRFF!!!

Saying Converge seem "polite" compared to this band and their many "peers" is just plain crazy talk!

Because i could not say it better myself. -From Teeth of the Divine: Where ’s the comradery? Where’s the fellowship and fun of an actual mosh pit? Since when was kicking each other in the face fun? Since when was spending an entire show trying to not get kicked in the face by a stranger been any fun? But, since when has metal been basketball shorts, sideways caps, flip flops and back backs? Some of the deathcore shows I’ve been too have been more like a High School fashion show than a metal show. Enough said. Music aside, that fucking karate sky punching shit has got to go.

Lyrics seem pretty punk to me:

We are the antidote and also the
disease. We're the oppressors who
posses marks of the beast. Mankind
deserves this, A catalyst for
deconstruction. A scapegoat to
hold humanity on its knees. A
self-inflicted social anarchy to
frighten the population into
submission. Intricate color
schemes on TV hypnotize them while
they sleep, and from behind the
scenes inject a fatal dose of
misery. So let these structures
fall. As buildings crumble, watch
this metropolis transform to
ruins. We have no sympathy.
Victims lungs overflown with
debris, their fractured bones
exposed, lacerated is their skin.
This is a demonstration in the
clout of government: Failure to
conform equals destruction. At the
end of this world we hold all the
answers. At the end of this world
you'll posses only misery.

This is pretty fun to find a label so earnestly hyping a teen fad. I guess units are still moving,so let's ride this as far as it'll go.

C'mon ,deathcore is awful and will only dominate the used cd bins in matter of months time. You know it's true."rapcore" "metalcore" , basically to affix "core" to a musical genre means "played by suburban jocks". What's next, doomcore? Please, please spare us.

But at least you're honest, It's about myspace and "the kids". It's the metal equivalent of boy bands,superficial by design, extremely embarrassing to have in your cd collection once the fad has passed .

The Red Chord and Despised Icon are closest to death metal and also closest to genious composing. Really good stuff.

I often wonder where this scene will go next. What will be the future of extreme metal?
but whether you like it or hate it,
It's just music.
I happen to like it though. and I'll listen to it until I like something better. and who the hell knows what that will be?

My only problem with it, is the hxc dancing at shows. :/
It kinda ruins the show when everyone is hxc dancing and you wanted to mosh. :_(
but yeah guys don't worry it's just another trend, follow it or not, open-minded people like myself won't judge you.