How did Carcass pitch-shift the vocals live? 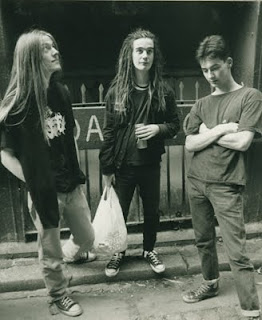 Back in the day, how did Carcass pitch shift their vocals in concert? I've wondered for awhile how pitch-shifted bands replicated the sound live and was watching one of the Pathologist's Report DVDs and noticed that both Bill and Jeff have second mics attached to the mic stands. Is the second mic hooked up to a peddle of some sort? I'm not sure if this is the right forum for this kind of question, but I'm curious and figure I might as well ask.


Answer: Carcass in the very early days used to set up with 2 vocal mics for Jeff, I'm not sure on the exact tech spec but one was regular mic and the other one, about 6 inches away would run into the mixing desk as normal but have pitch-shift effect added at the desk.So many of the songs had this vocal treatment, I personally think it was overused in the studio on the debut, in hindsight. The gutteral effect was alien and sick so it added to the eerie vibe the band was trying to create on record. Consequently the band felt it necessary to replicate it live, during early gigs.

I think the band ditched the 2 vocal mics idea pretty quickly, it looked strange, and it wasn't always possible to set it up right,it just became an extra hassle at gigs.It was easier for Jeff to learn to do it more gutteral live, and as the band did more albums, fewer songs from the debut made it into the Carcass live set anyway.

Some people know how to do gutturals without pitch shifter. It is similar technique to the mongolian throat singing.

Prime examples are the mighty Demilich from Findland and Pathologist from Czech Republic or Carcass Symphonies of Sickness album.

Demilich is the number one though, the "singer" use the holy guttural style all the time.

Inhaled or exhaled gutturals - no one care - but there are very few who do it in the right way.

So no pitch shifters needed at all. Just practice.