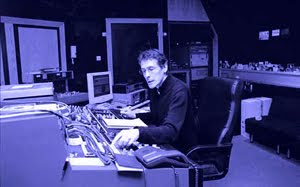 Recently, I bought some old Earache's vinyl records. After I took a close look at them I noticed that some of they have inscriptions near matrices. For example:

Scorn's Evanescence has 'Le sange et sur la lit' and 'It's a...it's a...'
Entombed's Clandestine has 'Is it a bird, is it a flute?'
Napalm Death's Haromny Corruption has 'How chuffed' and 'What a bloody doss'
Napalm Death's Mass Appeal Madness has 'Swinging Thumb Jump Side' and 'Screaming Gai Side'.

Do you remember anything about those (and others) inscriptions like that? Could you provide some more information about them?

Answer: Yes I remember them well, these inscriptions were a fun part of the process in the mastering/cutting of Earache's vinyl records. The process of making a vinyl record is a lengthy and costly one, but would always start with me making a visit to a mastering/cutting studio in London. During the 90's about a dozen mastering houses existed, my only time at the famous Abbey Road studio was to cut the Napalm Death debut 'Scum'.I also visited Utopia, and The Exchange for a few of early masterings but eventually settled on one place.

Over a hundred of Earache's 90's vinyls were cut at one location - Transfermation studios (based in the Stock-Aiken-Waterman studio complex at Lant St, near Tower Bridge) and by one man- Noel Summerville (pictured above). He is the NS inscribed in the wax. Luckily, Noel had worked on many 1980's UK heavy metal records like Motorhead, so the extremely heavy fast music Earache was creating wasn't that alien to him. Besides that, Noel was also a very likeable fella, he turned what easily could have been a stressful experience, into a pleasant afternoon. Also I must mention the affable Irishman Richard Dowling who mastered the majority of early Earache CDs aswell. Note - this was in the era before the CD 'loudness war' broke out which affected the whole mastering scene.

The cutting session would usually last all afternoon, at least 3-4 hours, and is a laborious process involving the mastering engineer physically cutting the music via a specialist acoustic lathe into a soft acetate 13inch disc. Getting the depth and width of the groove correct (deep grooves make it bassier, wider groove means louder) would require an expert eye and ear, and this was the talent of the mastering engineer. Many of the Earache recording sessions were extremely low budget but the expertise of Noel somehow made them sonically comparable to major-label-budget releases. Two acetates would be cut, also called laquers, for A and B sides - then would be sent off to be processed (involving dipping them in vats of molten silver oxide to make an inverse copy of the grooves) which would eventually produce the solid, hard metal plates to physically print the final vinyl which goes on sale.

The final part of the session after the A & B sides were cut would be the fun part for me. After the inscription into the run out groove of the catalog number - using a special diamond tipped pen - the engineer would ask for any other identifying marks or relevant info. It was common back then for bands to leave cryptic messages for fans on these run out grooves. Mostly these inscriptions were thought up on the spot by me, and are nothing profound. It's often just the stupid sayings which people in the band were chatting about around the time, captured on wax.

Noel is still available for mastering audio, via digital files - hire him at
iMastering.
Posted by Digby at 11:17 PM

Hi ask Earache
Just to let you know I'm still in mastering based in Ireland.
www.wavmastering.com