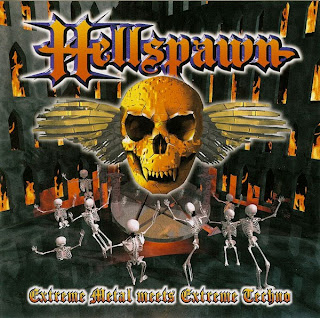 Question: Hi Dig,
I was checking out some old posts on your blog (a very good read - as always) about Pitchshifter, Godflesh and the whole late '90s punk/metal/techno/dnb crossover thing and it reminded me of the Hellspawn CD that you guys put out in '98. It was awesome! The Brutal Truth vs Freak track is just incredible.
How did the whole project come about? Did you regard it as a commercial and creative success? Can you remember what the bands thought of the results? How do you feel it compares to the Spawn soundtrack?
Cheers! From:


Answer: Looking back 12 years, the compilation Earache did in 1998 - where our extreme metal bands were remixed by extreme techno producers, well, it certainly seemed to me to be like a cutting edge project for the label to be involved in, but turns out it threw a sonic curveball which perplexed the majority of the label's diehard fans.

The name itself was a play on the 'Spawn' soundtrack, which saw mainstream rock and techno artists collaborate as a one-off for a major motion picture the year before. I tried to evoke a more "hellish" Spawn, as the remixes were way more extreme and uptempo. The artwork of our Hellspawn was created by Mark Craven (artist of Morbid Angel's Abominations of Desolation CD which contains the Hellspawn track).The brief was do a mash-up, ie combine elements of the techno style - Computer generated, 3D renderings- with metal imagery. Hence skeletons appear to be 'rave dancing' and the main image is a winged skull.If you look closely the skull is yellowy and has a bit of the iconic rave 'Smiley face' in it too.

To be honest, I don't think our compilation was anything other than a complete disaster, neither the metal fans or techno fans embraced it, in fact the purists on both sides actively shunned it. Like a two-headed baby preserved in a jar, nowadays it simply serves as a mid-to-late 90's curio, a relic of a moment in time when the very notion that metal and techno could mix seemed a possibility.

Away from the grind/death metal my label was famous for, from 1991 onwards some of the first techno records had started to enter my collection.I found them fascinating and because they were 100% digital productions, they just seemed much louder and more powerful than the tinny analogue rock CDs of the time.

I recall visiting the Warp records shop in Sheffield, I made the trip to see for myself what the scene was all about. I stood transfixed as the sound of LFO was being played on the shop stereo, the booming bass-lines were so extreme, LFO's debut single was an instant purchase.I remember playing LFO's 'Track 4' to the Earache staffers urging em to "check the heavy bass out on this" to be met with quizzical looks. Another fave early techno release of mine was Germany's Hardfloor. Their 'Acperience' EP (1992) is still the definition of "banging" even today.

Techno quickly became a major cultural force, and it affected everything. By 1992, raves had become the new underground and many of the 80's-era anarcho-punkers had swapped dreadlocks and politics for buzz-cuts and Technics. Colin Jerwood of Conflict spent most of the nineties organising techno events. The death metal scene had some members go AWOL too - Karl Willets, singer of Bolt Thrower - quit the group and spent almost a decade immersed in DJ/Drum n Bass culture instead, before his eventual return to the Brummie grind fold.

It wasn't just happening in the UK either- after daytime meetings in NYC, myself and Jim Welch, who was Earache's first USA label manager, would always go check out bands of an evening. One night we went to see Disassociate at some lower east side club- about 10 kids showed up, which was pretty piss-poor, given they were a decent grind/punk band. Then afterwards, the only place to hang out would be the semi-legal raves which often took place under the radar in a midtown werehouse somewhere. On arrival I'd see that hundreds of kids would be going nuts to banging techno and jungle. It was obvious that this was where the energy was, it was a youthful and vibrant scene.However, being straight edge at the time, and never a partaker in drugs, I had no clue that the "energy' was infact, all drug-fueled.

Rick Rubin was also hanging out at the same NYC raves - Rick soon formed a sub label of American Recordings called Wht Lbl (White Label) to release some of the new-fangled techno acts like UK's Messiah. It was not a great success.

During the 90's Techno and Jungle did strike a chord with the Earache's more open-minded metal artists though- bands like Godflesh and Pitchshifter would embrace the remix and DJ culture on their mid-late 90's albums, and found a certain level of fame from doing so.

A few years later in the USA a producer called Dieselboy would DJ drum n bass and would often add Metal riffs or vocals into his mixes, they became his trademark.

In 2006 US grinders Agoraphobic Nosebleed resurrected the idea and released a disc of weird and technoise remixes on Hydrahead Records called PCP Tornado/AnBRX which was hailed as innovative and groundbreaking.

Fast forward to the present day, and Deiselboy is keeping the Metal meets Techno dream alive in 2010, with his MONSTERS OF JUNGLE tour across the USA expected to pull in huge crowds.


For me personally, nowadays the Techno scene holds no interest.I find it culturally redundant, and creatively it is lagging way behind the most innovative rock music. The same technological breakthroughs (sampling, sequencing software) which spawned the genre 20 years ago have now become it's main limiting factor, in my view.
Posted by Digby at 12:01 AM

I think all leather is the only band doing the dance meets rock/metal thing and keeping it fresh
http://www.myspace.com/allleather
featuring justin pearson of the locust shane embury's biggest rival for the project king title.

I'm surprised you didn't mention Justin Broadrick and Kevin Martin's Curse of the Golden Vampire side project. IMO, it is one of the most successful pairings of brutal rock music and brutal techno.

Nowadays, there seems to be a resurgence of artists trying to combine extreme metal with the relatively new genre breakcore that emerged in the last decade. Some of these mash-ups, such as Whoukr and Deathstorm, are interesting, but none of them quite gel the same way as CotGV did on "Mass Destruction." While most of these crossovers sound exactly like that: self-conscious cross-overs, Curse of the Golden Vampire sounded like veterans of both punk/metal and electronic music fully absorbing the influences of grindcore, anarcho/crust punk, hardcore drum n' bass, digital hardcore, gabber, and power electronics into a mix that sounded completely cohesive, not like the result of a remix.

And on the topic of breakcore, I'm wondering how you feel about the genre. Is it just a retread of hard DnB, gabber, and digital hardcore, or do you think there have actually been advancements? I for one think Venetian Snares and Slepcy h ave done things that go above and beyond the early hardcore techno scenes.

I find it amusing that Karl Willets got involved in dance music. I remember asking him way back when the first issue of the GrindCrusher 2 compilation came out, what he thought of the Mighty Force track. His response was "mighty shit".

Actually I don't entirely disagree with him on that track but his sentiment was less specific.

dig's generalizing comments are in my honest opinion rather unfortunate, but i see them as that - personal comments. there is a rather wide array of artists that combine media (rock/electronica) that are very good in my humble opinion - author and punisher, bazooka, navicon torture technologies, michael wertmüller, etc. the same goes for the unfortunate comments on swans in the related post - their old material is still something plenty of bands wish and hope to beat in terms of brutality or significance - by no means an outdated sound, on the contrary. maybe idiosyncratic, but that's that. the question is: does the listener want to go there? i do. it's a personal decision. there's metal that i like and electronics that i like, and there's fun stuff in between. you simply have to "dig".

NO NO NO not a failure, this CD ruled. I got it at a used record store in 03 or 04 and it was one of my most listened to CDs. After I got big on The Berzerker and Mortiis (hope they're doing well on their own these days) it really solidified me as a life long fan of the label. I really really wish you would try this sort of thing again, with over a decade of musical evolution that's surfaced since then, a new Hellspawn CD could own hardcore.

It wasnt a complete failure, for people like myself who found that particular crossover of metal and electronics massively interesting, that compilation I have a massive fondness for. Ok it sounds dated now but you certainly deserve the kudos fot having the balls to try something different. I went on to persue this style and release my own records for the ten years following this release...definitely influential, I dont think people were ready. Nowadays this combo of metal and hardcore is coming back in a big way, albeit in a more technically polished and brutal manner. Well done I say! Todd

I picked this album up quite early on and it still gets played a lot. I've never been one to limit myself to one genre and this album proves to me that you can mix things up and get a good product.