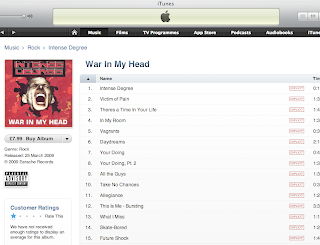 Question: okay so along with loads of other people, I ask...Intense Degree, why not just dig up the old masters and make them available to download? I've had a look on the Japan site for Disk union, and I'd buy it if I was able to read japanese. war in my head was the best album that earache ever released and it's a shame you won't listen to the fans.I used to have a huge collection of albums from the "golden age" of earache,so please just give the fans what they want. if there isn't a demand for the old albums like intense degree and filthy christians then obviously there's no point manufacturing cd's at great expense, but downloads are a cheap alternative. I think it's the right time to do something for the fans that were there at the beginning of earache and who made your label what it is today From: guillotinemaster75@yahoo.co.uk

Answer: OK dude you can rest easy because Intense Degree is now available to download from iTunes. See HERE. The one time CD reissue (first time on CD actually) was available from Disk Union in Japan, and is still available I think. Original vinyl is long gone though I'm afraid. You are talking about a record released in 1988 which had very few sales and the band soon disbanded, so ebay prices are hefty.But the download is available right now on iTunes.
Posted by Digby at 11:49 PM