Why no new material on Earache's CD & DVD re-issues? 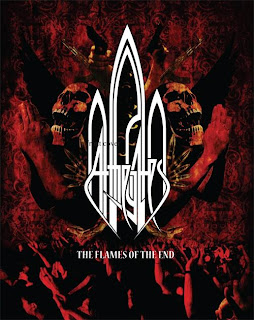 However, there was almost no new music material on those reissues (I'm not counting interviews - they were obviously new and awesome). Sure, some of the stuff was out of print or hard to find, but for the most of time it wasn't exactly new.

Does it mean the Earache vaults are almost empty? No unreleased songs, alternative takes, previously unreleased live recordings? Or maybe you just don't have rights to issue that kind of stuff (since most of the band moved to different labels)?


Answer: Well there is new material, but it's mostly in the form of the DVD documentary/ interview footage.I'm glad you like em. Personally, I find these retrospectives very interesting, because when our bands talk on camera on the subject of their careers and their past albums, many great stories come to light. Often its priceless stuff which never even got reported at the time. See the At The Gates documentary disk on their 3 DVD set for one of the best examples.Produced by Anders Bjorler of ATG himself, it is the surely one of the most detailed accounts of a band's career, ever. It should win awards in my opinion.

However, yes, you are right, as far as unreleased audio goes the back catalog vaults are indeed almost empty. Recording sessions back in the early 90s took place on analogue tape and were very time consuming and costly. Today's set ups are almost trivial - you can even record an album on an iPhone app if you want.

Because of the huge costs involved, almost everything our acts recorded back in the day ended up being used at the time. Tracks which didn't make the cut were used as bonuses for limited edition vinyls or B sides, or as extras on CD or for compilations. Nothing was wasted.

On very rare occasions, an entire recording would be shelved because it was simply not up to sonic listening standard. Y'know, the bar is not exactly set too high for grindcore anyway, but almost unbelievably, bands did sometimes fail to make the grade.

Two great examples are- the first mixdown of Carcass' Reek of Putrefaction was so bad, it had to be shelved, and marked for all time as "DO NOT RELEASE". The eventual released version sounds terrible so just imagine for a second what the unreleased version must sound like- it's pure sonic garbage. Also the first version of Vader's debut was deemed unreleasable, the playing is sloppy and haphazard. It was their first time in a professional studio - they flew to Tomas Skogsberg place in Stockholm looking for that Sunlight sound- but things did not work out too well.

Mistakes can still happen in the digital era too though.The tapes of the Bonded By Blood first album -2008's 'Feed The Beast' were shelved. They recorded with well known veteran producer Michael Rosen (Testament etc) but being young and new to the game, they weren't able to perform to his satisfaction.The chemistry was'nt right, so an argument broke out.The recording suffered, sounding very flat, and you could tell it was recorded under a cloud. It was shelved, but 2 songs did make the cut and were issued as bonuses on a seperate disc. The version actually released at retail as Feed The Beast was self-produced by the band quickly and inexpensively at LoveJuice labs in LA. This was a more familiar recording environment for the band as they'd done their demos there in the past.

Recording in a pro studio quickly exposes any flaws in a band, if the timing is out or playing is sloppy, you are immediately exposed.Nowadays of course the producer would simply edit out the bad bits in protools and create digital perfection.You could'nt do that using analogue tapes, it required numerous 'takes' or as a last resort actual scissors and sellotope to cut up and 'edit' the tapes.

It might have been a primitive, almost medieval process, but to many listeners, the old analog recordings often sound better than modern day efforts.The reason is because the mistakes, wayward tempos, and small flaws are baked in, and this quirk gave every album recorded before say 1994, a unique sonic character.They sound human.

Nowadays every metal album you buy sounds freakishly similar to every other one, because they are all pro-tooled to digital perfection, often the exact same presets and software plug ins are used. Any dynamics and wrinkles are ironed out simply so the CD sounds loud in the player. This means that sadly, any individual character the band originally had, is all too often squeezed out in the quest to sound just like everybody else.

Luckily some producers are bucking this 'Loudness War' trend. Ralph Patlan has created this year for Earache two amazing productions- White Wizzard's 'Over The Top' and the upcoming new Bonded By Blood 'Exiled to Earth'. Both are top notch, lively, dynamic productions, oozing with character and could mark the beginning of a possible return to the traditional art of recording metal - which is capturing the uniqueness of the band in a live(ish) setting, not replicating the sound of the software program.
Posted by Digby at 9:14 PM

Who would of thought after recording Carcass' Original ROP and Vader's debut, that they would of grown to be as big as they are now, just goes to show the Industry is full of suprises at every corner.

Thanks a lot Dig!

That explains a lot! Still, I think most fans would love to hear those Carcass and Vader records, even if they sound like shit. That's just how it is with fans - they want to hear everything.

I always felt that bonus material was stuff the band didn't consider good enough to sell but felt good enough for the labels... I can understand why considering how costly it was to record back then. Any possibility to recoup from an EP, a single or whatever was used.

I think bonus material is just an obsolete thing in 2010. People can download this anywhere now.