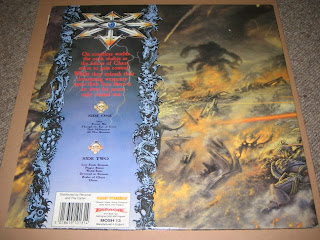 Question: hi, i asked a few days before if you released the bolt thrower \"realm of chaos\" album also without foldoutcover. and in what amount?
thanks and regards, chris From: christian.haas@konen.de


Answer: Yes Christian the actual single sleeve version of the Realm OF Chaos LP is made by Earache and is the rarest of the 2 original 1989 editions.Because the album used artwork owned by Games Workshop, and the young growing wargaming company was based in Earache's hometown of Nottingham and staffed by plenty of metalheads, they were very keen to sell masses of copies in their GW stores, so the lavish gatefold edition with 8 page lyric booklet was pressed in about 8000 copies from memory? It was the main edition at the time.As an alterntive a single sleeve version was also released, probably in 1000 copies? By the way, are you buying or selling? All ebay valuations are subject to 5% tax, please me @ Earache by paypal!! ha ha
Posted by Digby at 12:46 PM