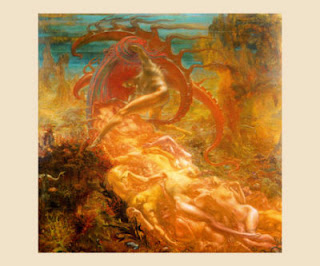 Question: Are you aware Morbid Angel used the same artwotk as Hexenhaus with their \'BATS\' album? From:


Answer: yes its pure co-incidence that Swedish thrash band Hexenhaus used the Artwork on their album "Tribute to Insanity" in 1988, and then a good 3 years afterwards, in 1991 Morbid Angel chose the same painting for the cover of Blessed are The Sick. At the time we were aware that it had been used beforehand,and showed the band the album- but it didnt deter Morbid from requesting it.In actual fact when we contacted the museum which held the rights for use of the painting - 1895's Tresor de Satan By Jean Delville- they told us that no other band had requested the image.So we know Hexenhaus did not officially seek to use the image from the rights owner, just copied it from a book we expect. For this reason Morbid Angel had the moral superiority, and indeed legal right to use it, as granted by the museum.I guess its fitting that Hexenhaus LP is no longer in print but Morbid's version has been in constant printing for 17 years now.Funny how two different acts came across the same art eh?
Posted by Digby at 1:18 PM