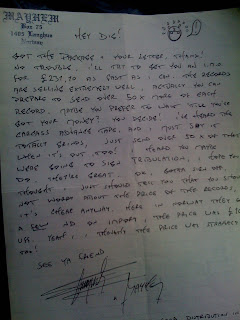 Question: So was burzum the only one of the second wave of black metal bands that you considered signing or were there any others? if so who were they. I read your post about deathlike silence and how you thought anti mosh was a dig at earache ( no pun intended) in reality it was a dig at the various short wearing skate boarding thrash metal bands anthrax in particular, theres a particular anthrax promo picture that i heard euro took offense to its where they are all wearing board shorts and charlie b is wearing a t shirt that is for the band the cure, aparently it was a betrayal of metal in euro\'s eyes. From:

Answer: I knew both Euronymous and Varg, met them both at different places and under different circumstances, but I spent enough time with them both to know what their thoughts were on music and other things. Mayhem used to be the seller of Earache Lps in Norway in the early days of the label.

The Anti-mosh thing was I'm fairly sure, indeed a slight dig at Earache, which was to be expected- I mean, Earache & Roadrunner's death metal bands were selling huge numbers by the turn of the 90s , yet Euronymous was still singing the praises of the likes of Venom, HellHammer, Sodom, Bathory- these were deeply uncool bands at that particular time, being seen to be part of the prior thrash wave from early-mid 80s and so a bit dated.He was very opinionated and knew what he liked and disliked in metal. 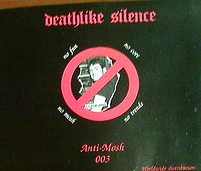 Its fair to say that the rise of Black Metal scene made those bands cool again, as they all had that certain ramshackle, shitty production sound but tons of attitude and pure metal spirit,which is their enduring appeal. Euronymous famously put the Florida producer SCOTT BURNS photo (lifted from the Terrorizer album inner sleeve) crossed out along with his snappy slogan- NO CORE NO TRENDS NO FUN NO MOSH. Scott was the producer of choice for the big selling Death Metal bands coming out of Florida and everywhere.

I know what you mean about the Anthrax look and the clothes they wore- for a while maybe around 1987 with the Indians single they were metals biggest crossover act, playing huge plaves, hanging out with superstars and wearing crazy garb like Indian head-dresses and bermuda shorts- which was the 80s street/skater style dude! I'm sure Euronymous REALLY hated that!
Posted by Digby at 12:58 PM