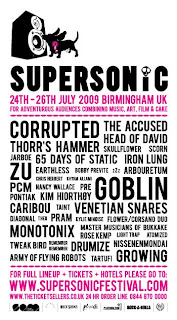 Question: Hey dig, Have you noticed that all 3 members of the original Napalm Death line up are appearing on stage at the Birmingham Supersonic festival, with their various new or old bands.Any chance of a Napalm Set?
from: Dalegrice355@gmail.com

Answer: Nah dude- this question crops up every so often and i think its highly unlikely. But you are right, the original Napalm death members are all playing SUPERSONIC festival. If ever a time was right to do it, its now,in July 2009 at this festival.

Justin is -I assume, but might be wrong - in HEAD OF DAVID, Nick Bullen is appearing with LIGHT TRAP (Nick plays the fest most years) and Mick Harris is performing as SCORN.Earache takes no sides in the old Napalm vs New Napalm debate though I will say i think would be highly poetic and somehow fitting if the 3 guys found a way to jam together a few Napalm numbers at the fest, especially after the HOME OF METAL project was so well received in the city.This was a project run by the Supersonic organisers, which went to great lengths to emphasise Napalm Death's importance to the legacy of great Heavy Metal bands which put the city of Birmingham on the map.

I also notice The Accused are playing too- they were my faves from the crossover era mid 80's and were kind enough to agree to my first ever release on the Earache label, so all it would need is HERESY to reform aswell, and you could have the first 3 Earache bands on stage in Birmingham, July 2009.

Plus IRON LUNG are playing, fresh from their recent Uk tour with Municipal Waste, and Shige/Scotch Egg is playing with his Band DRUMIZE, who can do no wrong, so its worth going just for these.

So all in all, it should be quite an interesting -if lacking in genuine Heavy metal bands- festival. See you there.
Posted by Digby at 3:00 AM

Justin won't be playing in Supersonic Festival - it will be the original Head of David line up and i believe Justin played on the second album.