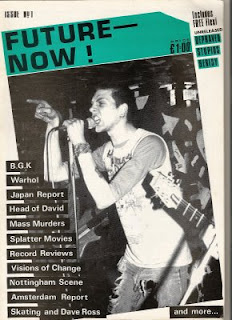 Question: Why is it do you think that so many label owners come from a music journalism background i mean theres yourself, lee dorrian, brian slagel ( who wrote for a nwobhm fanzine based in LA, whos readership included lars ulrich and james hetfield!)imediatly spring to mind. Im just curious as to why when sort of knowing what they are letting themselves in for they take the plunge? From:


Answer: That's a good point- its because we are opinionated about music, very opinionated, so eventually some poor bastard on the receiving end of a scathing review says: "Why don't you try putting out records yourself, if you can do any better?". So we take the plunge and give it a go, for real.In my case no one was releasing the music I wanted to hear, so had to do it myself.

I did my time as a fanzine writer- I collaborated with a group of friends on a local Nottingham zine called Future Now plus had a stint as a writer for long-standing HC punk zine Maximum Rock N Roll and Flipside, plus a few others. Ex-writers do actually form a large part of the music business, especially PR, as they know how the media works from the other side of the fence, its quite common.

I had no idea that Brian Slagel had written a NWOBHM fanzine, but it makes perfect sense, his wiki says it was named "New Heavy Metal Revue" I bet copies are rare. Also, did Lee Dorrian really write a zine- his wiki says it was called "Committed Suicide", but I dont recall it myself, you can be sure it was an Anarcho-Punk zine I expect.
Posted by Digby at 1:13 PM