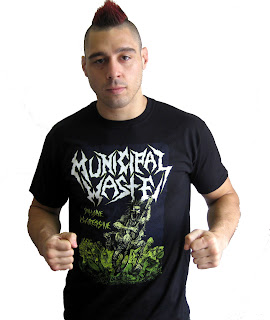 Question: How did earache end up sponsering dan hardy? and what are the chances of an earache artist writing him a theme tune? since dan\'s a big hardcore old timer sss would be cool. From:


Answer: Simple answer is- we have a few fanatical fight fans working in the offices at Earache - so when up-and-coming UFC fighter Dan Hardy started to rise through the ranks, we were totally chuffed for the guy, even more so because he hails from Earache's home town of Nottingham, UK. Nottingham is a small city in the midlands of England, so when a world class mixed martial artist(MMA) breaks through on the global stage, its big news to us.

With his trademark bright-red mohawk and professed love of metal and punk, we figured we'd have a strong connection with Dan- and thats exactly how it turned out.He's a real down to earth bloke who loves his music. Earache is now a proud sponsor (among several others like Tapout/ Rough House ) of UFC fighter Dan 'The Outlaw' Hardy, and with his attacking style and superb dedication to the MMA craft, he's going right to the top of pile. 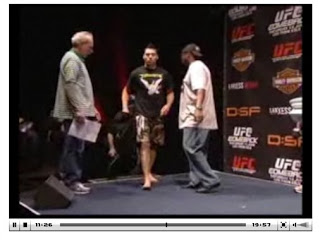 
Earache has a big history with fighters and wrestlers going back to when we released the European version of the official ECW CD compilation 'Extreme Music'- featuring Megadeth and Motorhead and even Pantera (under name of Los Trios Diablos) in 1999.ECW was the USA underground Hardcore wrestling phenomenon of the mid-late 1990's and extreme metal and extreme wrestling seemed a perfect fit. ECW disbanded in 2001.

In 2004 Californian Nu-Metal act Adema released the "Planets" album on Earache which featured Ralek Gracie on vocals on the song "Bad Triangle".Ralek is the son of UFC founder Rorian Gracie and nephew of all time UFC hall of famer and legend Royce Gracie, who won or drew in 4 of the first 5 UFC cage fights. Ralek sings/raps under the name Rio Life on the Adema album.

As for Dan Hardy's walk-on music as he enters the arena- its currently UK 70's Punk/Oi band Cock Sparrer's "England Belongs to Me"- which is mostly to do with him not wanting the generic chug-chug metallic HC riff, which every other fighter seems to walk on to. Its also because it has England in the title, as he's proud to represent England, because most UFC fighters are Americans.

We do have plans to work with Dan on some new Earache themed walk-on music- SSS Short Sharp Shock is a good suggestion, we'll discuss it with Dan soon to find something he likes, in time for his next fight in October.