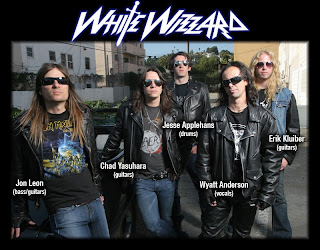 Question: Being as earache as a label is so open for fan input what are the chances of seeing a nwobhm tribute album from your nwothm acts? Id love to hear cauldron blast through Budgie\'s breadfan ( duel influence as tallica also covered it) or white wizard let loose on some maiden tracks. Also thanks for the great gig in london with cauldron and bonded by blood mint show and i got to meet a member of angel witch as well as cauldron. From:

Answer: Yes, its been quite gratifying for us to see how well fans like yourself have appreciated these new bands, dubbed NWOTHM- we have signed CAULDRON, WHITE WIZZARD and POWERVICE ( they need to finally regroup round a new singer), plus don't forget the amazing ENFORCER and RAM, who are on other labels.

The scene is so tiny, it barely makes it onto the radar of the general metal throng, but the ultimate accolade has surely come recently when the figureheads of the original NWOBHM scene have decided to support the new scene, and give the fledgling bands their generous support and backing. 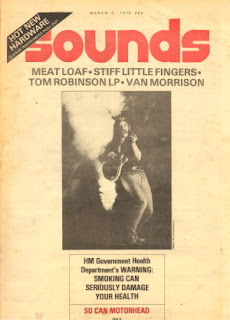 Original UK music paper scribe Geoff Barton was the one who dubbed the like of Maiden, Leppard, Tygers, Angel Witch etc as NEW WAVE OF BRITISH HEAVY METAL in October 1979 in Sounds magazine (he later became first editor of Kerrang! mag).This was soon shortened to just NWOBHM.
Almost 30 years later, this month in 2009 Geoff writes a great article in the new CLASSIC ROCK magazine comparing the new bands to the originators.Pick up Classic Rock at a newsstand for a great cover mount CD sampler with many of the NWOTHM/ NEWTHM bands! 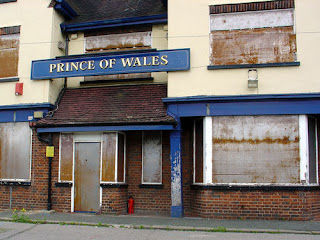 Likewise the irrepressible Neal Kay, originator of the Heavy Metal Sound House- at the 'Bandwagon' (this was the name of the function room adjoining the Prince of Wales pub in Kingsbury area) of North London in which he DJ'ed and singlehandedly popularised new Heavy Metal bands in late 70's- including IRON MAIDEN (who dutifully named their debut 7inch THE SOUNDHOUSE TAPES).Neal himself has thrown his support behind the new bands- which we are very grateful for his patronage.See Neal & Cauldron video interview below.

Anyways, back to your question: Maybe you dont know dude, but its not a walk in the park for these bands playing the music they love.They receive a lot of flack from detractors who accuse them of just being mere rehash of NWOBHM, and they are constantly accused of being throwbacks, and "why dont they do something original instead?". This plagues all bands who prefer their music traditional and true, and trend free, unfortunately. Our opinion is that the NEWTHM bands are, on the contrary, playing the most contemporary new metal style that exists at the moment.

So even though its obvious for the bands to do early covers, its not advisable at the current time.I'd love to hear White Wizzard try Spell Bound by Tygers or even Runaround by Halen, they could pull off those classics as covers, no problem, but its not advisable at the moment as they need to forge their own identity with the fans and public first. Its 2009 not 1979, we are well aware of this fact!

Actually Cauldron have a cover on their "Chained To The Nite" album- but no one recognises it! Its Chains Around Heaven by Black N Blue- but its the early Metal Massacre Vol I version from 1982 they recorded, not the later glam-rock version which became huge in later years.Cauldron also covered Germany's Tyrant on their EP an also covered Manilla Road - Necropolis for the album which remains unreleased, for the reasons I stated above.

Heres Neal Kay - a veteran and originator of the NWOBHM telling some amazing stories:

Watch Cauldron recite a list of their fave NWOBHM bands from the era, they are truly fanatics:

My band plays this style of music, we often hear the comments that we are copying existing music etc... we play a cover of breakin the law and we usually get described as 'priest like' probably due to the high pitched metal vocals and sweeping solo's... this is the music we love to play, and its great to hear new bands are getting signed of this genre and there is alot of great new bands out there waiting to be discovered...