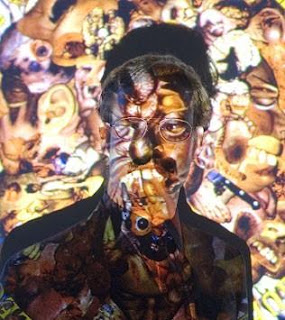 Question: Ive always wondered this being as earache put out the originals. What did you think of the carcass clone bands that have popped up over the years? and have you ever wanted to sign any of them? There were bands like general surgery who were friends with the band from their inception due to tape trading who seemed to work their music as a possible friendly rivalry and now theres obviously the bay area bands like impaled who mix the carcass sound with slightly more humour based lyrics. The end of the line is obviously The County Medical Examiners due to their actual day jobs and from what ive read the singer/guitar player would not be doing his day job if it wasnt for carcass as he was one of those people as mentioned in the 1992 interview on the necro dvd who took a certain root of education because of carcass! From:


Answer: Yeah its been quite amazing to watch the rise of Gore-grind as a genre.Obviously the genre started with Carcass' Reek album in 1987- Reek is heavily downtuned gore-themed speedy grindcore with sick inhuman vocals, topped off by a shoddy production job.I often cited it as my favourite album of all the early gamechangers Earache released, because this album had no links to the past at all,no anarcho-political lyrics, no discharge parts- everything about it was crushing and totally off the hook.It was a new sound, and for many years the record didnt sell many copies (it was banned from shops due to the cover art, and remains the bands poorest seller by a long chalk) but somehow, and to our amazement it caused an outpouring of similar sounding demo bands, they popped up everywhere- like a rash. Normally bands keep an eye on their progress via monitoring record sales, but Carcass had no sales numbers to speak of, so the band could only judge their success by number of their clones.

And there were tons of them- Finlands Xysma was the first Carcass clone out of the blocks, I beleive - I thought about signing them to Earache for a while actually, but never did anything about it, and anyway Xysma within a year or two sort of mutated to a heavy rock n roll act, and never returned to the goregrind. Just like Carcass.

The County Medical Examiners used to inundate us with their slickly packaged demo material, looking for a label, I recall they even had their Cd already recorded, complete with body part cover art, and just needed someone to release it.It was a nice trip down memory lane, and undoubtely they ARE the most faithful clone band to date, but we dounted their claims of authenticity in the medical practitioner field.Sounded like a yarn spun by med students to me- but even if it was true, how could they tour? Relapse did the deed that Earache declined to do.

Heres XYSMA in their grind days: