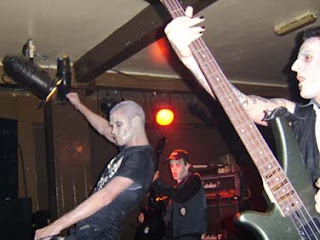 Question: Do you think that Send More Paramedics could have been as big as the new wave of thrash bands coming through now if they had started a few years later? I\'m guessing you were fans of them as you put them on your Thrashing like a maniac comp, and they were at least as good as any of the newer thrash bands you care to mention. From: redear16@hotmail.com


Answer: I know what you mean, Send More Paramedics were at least 2 years ahead of everyone else, singing about Zombies,and playing punky HC-influenced "thrash".The band were so far ahead of the curve, that by January 2008 when we released our Thrashing Like A Maniac comp, which showcased most of the new school thrash bands,SMP had actually split up for good, and diappeared from the scene. A bit like Deadfall aswell I suppose.

The band were actually the very first band signed up for the comp, aside from the Earache acts, because they were locally based to us, in the Nottingham area.Also the band were included as a favour to their label In At The Deep End, which is a local Nottingham label we take a great deal of interest in.As far as I know members of the band had lucrative jobs and so gave up the rock n roll dream for steady 'normal' employment, which is fair enough.

It's debatable wether the band would be huge in the current climate though, they were great, especially onstage in all the zombie gear, but the songs were actually quite punky and the bands getting huge nowadays are the very metallised thrash bands with guitar solos aplenty, as opposed to the more HC-influenced thrash crews.
Posted by Digby at 2:50 PM