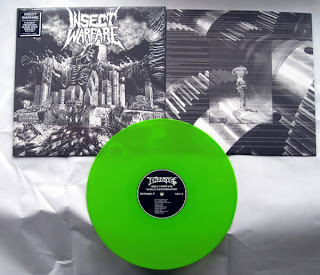 Question: I couldn\'t help noticing that the new Insect Warfare disc has the catalogue number of MOSH068..and there\'s a blank space for that number in your catalogue..so what\'s the deal....? Why such an \'old\' catalogue number..? And, is there any intention to release another collectors/limited package in the near future (such as the 400th release)..? I was wondering if there might be scope for another \'Rareache\'-style item. Cheers! From:

Answer: Well spotted my eagle-eyed friend! We wondered if anyone would notice that this new release on Earache has a Mosh 68 Catalog number.The Mosh numbers have been allocated in sequence to each release on the label for the last 20 years,I personally know there's a lot of crazy fans who do collect the complete set of albums on Earache, so now and again we like to tweak things to make the collectors work harder, keep em on their toes. Earache is currently up to Mosh 380-something, yet Insect Warfare cites Mosh 68 on the sleeve, as you point out, which if you follow the label closely means it 'should' have been released in 1991 or so, not 2009.

Its always bugged me that the original Mosh 68 cat number remained unreleased, and our prime early catalog always had a big missing Mosh number in it.Back in the day, avid collectors used to speculate on what it might be,even. In 1991 or so Mosh 68 was due to be the SORE THROAT debut album "Unhindered By Talent" reissue- original label Meantime Records had gone bust and sold me all their tapes - but the record was shelved by me, because Sore Throat at the time specialised in being prime dickheads, Rich Walker still is one, in fact. They spent all their time and energies putting the boot into this label, and Napalm Death especially, dedicating entire albums to the cause like "Never Mind The Napalm".What started as in-joke banter from some fellow HC scenesters, soon turned a lot darker, as they became more motivated by pure jealousy at other's success. Rich even got headbutted for his troubles.It seems petty now, looking back, but when their ire and rhetoric turned solidly towards Earache, I lost interest in Sore Throat pretty damn quick, and shelved the re-issue. 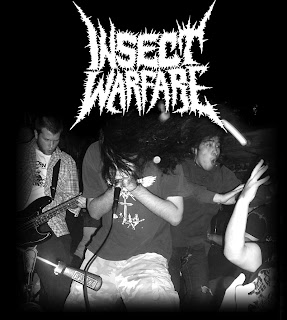 For almost 20 years Earache did not release any grindcore bands, as none seemed up to the mark set by our early trailblazers, to my ears anyways.That was until we heard Texan grinders Insect Warfare who released their truly earth shattering World Extermination album on a small DIY label 625Thrash in 2007.This instantly became my fave grindcore album of recent years, I felt it was up there with Napalm Death's FETO and Terrorizer etc because unlike most other grindcore bands around, most of which captured the sound perfectly OK, only Insect Warfare managed to capture the all-important 'feeling' of the early grindcore scene aswell.

Earache made some moves to license the record from 625, but they had to check with the band themselves, who unknown to me, had split up after returning from a far east tour.So that seemed to be the end of that, we gave up on the idea.
A few months went by, then out of the blue, I heard from Beau the guitarist of Insect Warfare.From talking to Beau it was obvious he's a diehard fan of the Earache early output.On an early 7inch they went a bit ridiculous, and actually thank the Mosh numbers that influenced the band.It came up in email conversation that since the record sounds like the record Napalm Death SHOULD have made after FETO (instead of going all Death Metal) plus World Extermination could easily have been released on Earache in 1990, then why not give it an authentic Mosh flavour in the form of a spare early catalog number.The band loved the idea, hence Mosh 68 was finally released on March 2nd 2009.
Posted by Digby at 8:41 PM