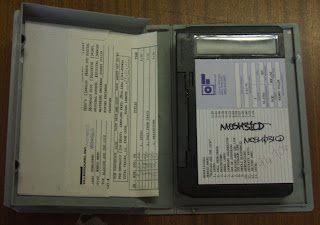 Question: It says on Wikipedia that Earache sold the rights to Morbid Angel Blessed Are The Sick Master Tapes on ebay.Don't you now think this is a little bit foolish?
From : mikeholloway435@hotmail.com

Answer: Earache was launching its ebay store and we wanted to create some excitement on the interweb about it. We decided to auction something truly exceptional to catch the attention of folks and create traffic.If folks found their way onto the store to check it out, we figured they might also buy some of the 600 more mundane T-shirts & Cds which are on offer.

Phil who runs the ebay store asked me about selling original test pressings of early Earache releases, but they would have had to come out of my own collection,and as I did'nt want to part with my precious White labels, that was a non starter- so after a bit of thought we came up with something much better.

I remembered some years before that the Beastie Boy-owned Grand Royal label had gone bankrupt and offered itself for sale, including many of its master recordings, which were put up for auction to the public.It seemed quite an ignominious end to what was easily the hippest label of the 90's alternative rock scene.Bankruptcy auctions usually take place behind closed doors, but this was the first do be done online and in full public view, it created a massive stir.A group of fans won the auction and subsequently relaunched the label as G2 Records minus many of the famous names of course.

Earache was not in bankruptcy, neither were Morbid Angel, but technology marches on relentlessly, and in the Earache store-room today are hundreds of vintage "master" SONY PCM 1630 tapes which are quite unplayable, because they are 20+ years old technology, the format is obsolete and the machines to play them are scarce or no longer exist.They gather dust and take up valuable space, each tape is the size of say, half a lap-top, they are frankly bulky and useless.The data on them has long been transferred to CD (which is identical) and other modern formats.NOTE they are not the same as the original multi-track tapes -2 inch analogue Ampex- with each of the original instruments recorded takes- those were not for sale.

Instead of dumping the PCM 1630's we thought maybe they might have some appeal to the crazy collectors out there, they do have a historical antique value after all, as it is the actual tape that the first replication of Blessed Are The Sick Cds came from, with hand written notes and even a song title change written by hand, by me.It might make someone's day.

An Australian fan won the auction, I think he paid $700, and he was ecstatic to own a genuine slice of early Morbid Angel memorabilia, and we were glad to provide it.Naturally, he has no rights in the recording or right to reproduce and copy the tape, this is understood by all parties, except the dimwits at the online news services who assumed wrongly that it was a going -out-of-business fire-sale for the label.To be fair, most highly publicised master tapes auctions are for that reason, like sayTVT records recently, its an easy mistake to make.

In hindsight, if I'd known all the fuss and mis-interpretation it would cause, for a measly 700 bucks, I would'nt have bothered. But our webstore has done great business because of the publicity so its not all bad.
Posted by Digby at 11:44 PM