The D in D-Beat stands for Discharge! 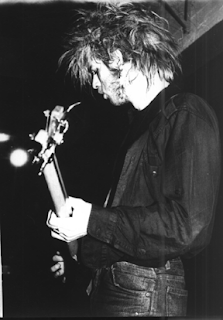 Question: you said on a previous blog you see a d beat revival being a big thing what bands do you see doing it? Personally i see tradgedy, drop dead and disfear leading the charge with the newer bands following. I dont know what your opinion on this is From:


Answer: This is a subject dear to me - back in the day I was at many early Discharge gigs including at Derby Ajanta club, where the Decontrol single cover picture was photographed, I'm on that cover in the crowd gawping up at Cal the singer.
Discharge were beyond awesome in the early days, their importance to the punk and metal scene cannot be overstated.Many bands can lay claim to being influential but Discharge were truly monumental, they changed the DNA of the entire punk and metal movements. That's some feat, believe me, maybe only Nirvana have managed it since.

Its scandalous that music history books do not devote entire chapters to the Discharge scene,as the movement they spearheaded continues to this day.If the Earache label story ever gets told in a published book (Albert Mudrian's excellent book Choosing Death covered most of it, now other writers contact me regularly for the full story) you can bet the first chapter will be all about Discharge.

As for the new bands- Discharge have Rainy on bass again, in my eyes he's the star of the show, his basslines are so fluid, he gives the band that all-important drive and momentum.It took me 12 seconds listening to the new 2008 album Disensitise to hear Rainy's trademark bass rumble, at which point I knew they were back on top notch form. The countless Discharge-clone bands never sussed this,except maybe the superb Disfear who are arguably the biggest Dis-band in the world, containing members of major metal acts like Entombed and At The Gates, but Disfear get a bit too rock n roll-y for my liking. Tragedy are killer aswell they perfected that wall of power for sure, but my vote as the best of all the pretenders goes to Aussies Pisschrist.