New thrash bands- will they end up progressing? 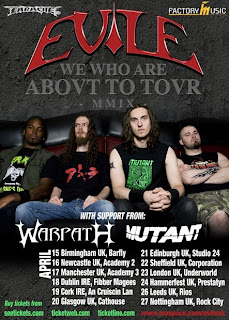 Question: Do you think there is a possibility in a few years time some of thease new wave of thrash bands could enter the alt rock arena like the original thrash bands did? admitidly metallica did it out of boredom and through rediscovering a love of sabbath( according to a kirk interview). I know it seems a bit premature to ask but i mean look at cave in then went from a slayer/death influenced sound to a radiohead meets foo fighters sound in the space of just a few years. From:

Answer: It's possible I suppose that this new crop will emulate their Big Four heroes and go more progressive and less thrash 2 or 3 albums down the line, but from where I'm standing, many of them definately appear to be thrashers for life. Most of the new wave of thrash bands are pretty young, mostly only being around a couple of years, and judging from dealing with our own bands, they simply play thrash because they love the genre, and like it or loathe it, you gotta admit its played from the heart.

Evile do have a tendency to write the odd 6 minute epic- like We Who Are About To Die on their debut album, and their next album will I imagine again have a lengthy epic number (or 2), but having heard some demos, Evile are developing a seemingly more complex kind of Thrash.
Posted by Digby at 1:04 PM

Interesting topic. Most bands progress, but as we all know not every progress is good. Better to stick to what you good are then to try something new and failing miserably.