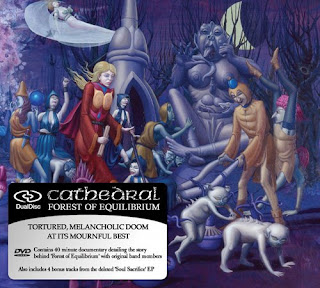 Question: I am writing about the forthcoming re-issue of Cathedral\'s debut album.

It\'s weird to see a re-issue missing the intro title; I guess it\'s there in audio but it\'s a little cheap to let it out, accidently or not. Was it a mistake on the layout?

What about making the DVD available for free for those of us having both the album and following EP? I would like to watch this documentary \"legally\" but I find it useless to buy the album again. I guess it will find its way on various bit tirrent sites for this very reason so considering making it freely available online (youtube) would make things better for everyone, I guess.

I am glad to see the album available again for a new generation of fans who might have missed it first; it\'s a doom classic! Just don\'t forget the old guard which was there first...
From:

Answer; I don't understand your point about the intro- its on the re-issue, obviously its the same tracklisting as the original, with 4 bonus songs (from long deleted EP Soul Sacrifice - which contains some of the best Cathedral tracks).Also includes massive fold out poster of the artwork, containing extra art parts not seen on the original issue, back in 1991.The most important part tho is the 40 minute DVD side of the disc- this is about as in depth a documentary as any fan could wish for, the band got together again for the first time in about 10 years to talk about all aspects of the album.Even the artist Dave patchett explains the meaning behind the artwork.
OK if you already have the originals this is not for you- but try imagining its a 40 minute DVD we are issuing, and the audio comes free. Heres a taster of the DVD :

The tracklist which was sent around didn't feature the intro so hence the confusion.

Glad to knwo everything is there but I still think it's a little too much to invest for a 40 mins documentary.

.'s comment touches upon one reason why DualDisc is driving people away, but there is another one that I still cannot believe people are failing to consider.

Simply put, two-sided optical discs are a no-no. In the early days of the DVD-Video format, dual-sided discs were attempted as a compromise because the mechanics of making a dual-layer disc were uncertain, a little risky, and prone to replication error.

However, early DVD-Video punters soon discovered, much to their dismay, that it was far easier to scratch a dual-sided disc than it looked. Even placing the disc into the player or back in its case was a tricky, delicate task with a tiny margin of error, as there was no "safe" way to hold the disc. This problem was especially compounded when users had difficulties with their hands, such as repetitive strain injuries.

I could provide a small list of Earache rereleases I would have purchased if the discs were not dual-sided. That is, if the DVD had been in the package as a separate disc, or not even included at all. But as one of the consumers who got into DVD-Video before it became so popular, dual-sided in any optical format makes me run screaming.

A pity, really, as I would gladly pay a higher price for In Memoriam, Forest Of Equilibrium, and even a little DVD (that I will never play after having moved on to high-def anyhow) in a nice box.