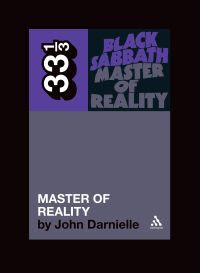 Question: Nothing Earache specific here, but more just a general metal appreciation question. Has anyone around the Earache offices read John Darnielle's Master OF Reality from the 33 1/3 series of books? I just picked it up and read it in a matter of about 2 hours (I'm a slow reader) and it might be one of the greatest books I've ever read (right behind Catcher In The Rye). Seriously. That's all. Plain and simple. If no one has heard about it, please take a strangers recommendation and pick up a copy to pass around. It's soooo good and could apply to anyone's favourite record or just a heavy music lovers appreciation for what heavy music can offer a person as a way of life and form of therapy. From: mufuka@yahoo.com


Answer: Thanks for letting me know about this.Personally, I had no idea such a series of books existed, it seems a great idea to cover an individual album and write about it from the listeners perspective. From searching the web I see Continuum have maybe 60-odd books in their catalog in this 33 1/3 series, most are too Indie for my tastes but for £6.99 you cant go wrong with the Sabbath or Slayer or the Nine Inch Nails books I reckon.

Heres a cool interview with author John Darnielle from Popmatters.com he certainly knows his stuff.

Last year I was fortunate enough to meet Jim Simpson who was the original manager of Black Sabbath- he was speaking at the first 'Home Of Metal' event in Wolverhampton.Back in the late 60s he was running a jazz & blues club, which Earth played at, after seeing their potential he got working with them as manager.Jim was the one who scored the band their record deal.You can read a great early band bio here.

What was remarkable to me was how he described the work ethic of the band.They had extensive rehearsals most days, as well as shows at night, sometimes two shows in a day, and - get this- weekly planning meetings.No one can deny that the band worked incredibly hard for their success from the get-go.Plenty of well-known bands today think one rehearsal a week is pushing the boat out.

Sadly after helping the band make two break-out albums Jim was ousted as manager.The predatory US mega-manager Don Arden whisked the band away from him, with promises of riches.Nowadays Jim is still involved in music, running a Blues/Jazz label and promoting an annual Jazz Festival in Birmingham.

Cheers for the question- it gives me an excuse to add my fave Black Sabbath track- Symptom of the Universe 1975. Sabbath undoubtedly created the Heavy Metal and Doom metal genres, but you could also argue this song hinted at the start of the coming speed metal or thrash scenes aswell.