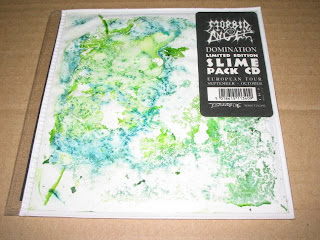 Question: Hi Dig
Many years ago you released a slime pack CD edition of Morbid Angel's Domination album. At the time the story was that they burst open in transit and were never released in shops. The only place you could get them was direct from Earache.
I bought a copy from Earache and would like to know what the full story was and how many of these slime packs exist.
Cheers
David. From: dave666hume@hotmail.com

Answer: Well if you have one, hold onto it, because they sell for a small fortune now. This special edition CD was withdrawn from sale before it was even released in 1995,I guess a mere handful might have been sold to die hard fans or pre-order buyers at the time, the rest were safely destroyed.In May 2009 a copy sold on eBay for $1200. Its the rarest Morbid Angel release by far.

What happened was that by the time of this their 4th album mainman Trey Azagthoth was in his 'Slime/Swamp' phase - the album had deliberately heavy/ sludgy production, also boasting songs like 'Where the Slime Live', also the cover sported a fetching slime green logo. Morbid Angel logos have only ever been red or green and lately blue to complement Trey's then-current 'Lava phase'. 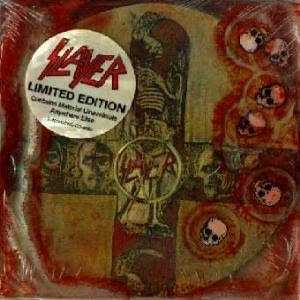 Earache does try to do weird and special limited editions for collectors and I got the idea to release a special slime pack, similar to the Slayer Seasons in The Abyss Blood pack from a few years previously.

Basically it seemed a cool idea to make the CD in a plastic pouch wallet with green type slime inside, but making it was harder than we thought. We scoured the globe to find a plant which could do this, it was really hard to find a place which could undertake it, but eventually a US chemicals supplier was commissioned.We assumed the supplier in the US would use harmless kids type toy-slime stuff and we ordered from memory 1000 packs to be delivered to our UK werehouse.

The first we heard of any problem was when an anxious werehouse manager called us up to complain that some of the boxes had been damaged in transit and the green slime oozing out had burned a hole in a workers clothing.It also stained the floor bright green, and could'nt be washed off.Then when they discovered the packing slip which accompanied the CD, they immediately locked it away and refused to handle the shipment any more.

This packing slip was about 10 pages long, the first 2 of which gave the chemical composition of all the ingredients of the slime, the rest of the pages contained dire warnings about it.Do not inhale, Do not touch, seek immediate medical attention if on skin, may cause burns, may cause neurological damage and so on. It was scary and unreal.

We frankly couldn't believe this was what we had been sent. We had a few intact boxes sent to the office for us to check.We handled them here and luckily we didn't die, so we assumed it was a case of typical American excessive legal warnings, in case of being sued.The remainder were disposed of by a specialist toxic waste company.No way could they be on sale to the public.

It turned out that the chemical composition of all the harmless green slimes are legally patented by kids toys manufacturers so they had to concoct their own slime formula.They thought it was for some industrial type use, they didn't know the eventual use was in CD pouches on sale to the public.

Over 10 years later the slime has all evaporated just leaving dangerous-looking green and blue crystals in the pouch.All I can say is- if you see one, give it a wide berth, and don't eat it.
Posted by Digby at 5:58 AM

Everyone ripped this idea off from the Vio-Lence vom-pack.

Since writing this blog, more details have come to light. Our label manager reminded me that the shipment was actually disposed of by local Nottingham legend and original 1977 punk madman Hendrix Sic Boy who turned up in his van to take them to the disposal plant.

Years later it turns out he admitted to duping us. He took the money for proper disposal, but then he simply drove his van down to the riverbank and dumped the entire pressing into the river.

Ooops, I guess environmental concerns weren't high on his agenda.

So if you want a copy try the river Trent.