Is Gama Bomb getting a physical CD/LP release? 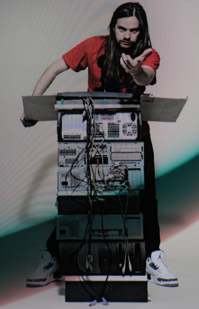 Question: Interesting news about the new Gama Bomb album being released as a free download - I'm not sure if it worked for Radiohead with 'In Rainbows' but fair play to the guys for giving it a shot. My question is however - will there actually be a physical version available at any point? As much as the world seems to love music for free, I am an old school collector and would love to have a 'proper' version for my shelf.
Cheers! From: larsonchristiansen@hotmail.com

Answer:The whole idea for the new Gama Bomb album to be given away free came from this blog actually. In a guest blog for MTV's Headbangers Blog, singer Philly Byrne admitted quite truthfully that he obtains most of his music collection from torrents and illegal download sites. Some time later - with tongue firmly in cheek- I mentioned in this askearache blog that it would be hypocritical for him not to do likewise on his own new album. I guess I dared him to do it, and he in turn dared me to do it!

So we both agreed it was a cool thing to do this.Its a genuine gesture by both label and band to give it away free, main motivation by the band is to not 'criminalise' anyone who downloads this album.Downloading is not illegal if the band wants to release it free. Neither of us know where this thing is headed, except both sides have a vague hope it'll increase the band's overall popularity.The band head into the studio to record the album in 3 days time, and it will be placed online within a week of it being finished, on November 5th. Its available on that date from earache's website as 320kbps Mp3s fully tagged and no DRM whatsoever, and digital artwork, and we assume it should be all over the rest of the web after that within hours.

News that it will be given away free has gone down fairly well with fans and non-fans alike, but we realise some collector-type folks prefer a physical release.Metal Hammer mag in the UK will release a cover-mounted version of this album in December, so a CD can be obtained if you purchase the magazine.

Sometime in 2010, when all the hullabaloo has died down we do have plans to release it on CD and LP, and a very lavish deluxe collectors edition to boot.It should also appear on Spotify as a free stream, and on iTunes as a low price download, if you prefer your music that way for ease of synching to iPod or whatever.So yes, if you simply must pay for it, in time there will be indeed a physical version of the album, but for at least a few months its download only, I'm afraid.

Heres Gama Bomb singer Philly Byrne explaining why his band are giving away their entire new album for free on the interweb: