Earache - why no Ripping Corpse in the 90s? 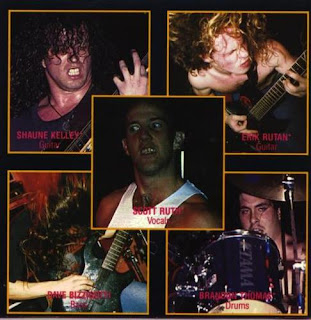 Question: Another rumour.... is it true that you wanted to sign Ripping Corpse but David Vincent advised against it? Im guessing its bullshit but wondering if you could put any light on it as to how it may of started, etc... From:

Answer: Short answer is - I was really into Ripping Corpse, musically they played prime Death Metal in the Morbid Angel vein, and contracts were ready to be signed when I suddenly backed out of the deal.It was the Hardcore look (short hair & baseball cap) of the singer which actually put me off signing them.

The early 90s were a golden period for Death Metal as the scene exploded. Earache was one of the leading labels signing these types of bands, and I was the one responsible for the signings, but would always listen to feedback from our already signed acts. Mick Harris, Bill Steer and David Vincent would often recommend bands to me, reporting back on bands they had just played with on the road or demos they'd picked up.We were all just rabid fans of the emerging DM scene.

Back then the label was swamped with recently formed Death Metal bands demos, arriving mainly on cassette, choosing which bands to sign and which to pass on was a huge gamble. A&R is a thankless task, because in the space of 10 minutes and during the course of 2 or 3 songs you have to try to decipher and work out the career-worthiness of a band for possible future investment.Back then, snap decisions were made on a daily basis about all the new death metal bands, the only tools available to decide the bands fate were the music itself, and if you were lucky, a photo.

From a label point of view, the A&R process involves trusting your gut instincts about a band and making the best objective judgement call you can make.Don't forget this was all happening in the pre-MySpace/YouTube/Blogger era. Nowadays A&R is so easy, literally anyone can do it, as all the info needed including playcounts and viewcounts and sales statistics are a click away.

The band photograph itself is an incredibly useful A&R tool, I don't mean for the obvious judgment call on the overall look/clothes of the band, but on a deeper level the experienced eye can tell the cohesiveness or otherwise of a band just from the members' body language.Tell-tale warning signs are a member standing in their own personal space a foot away from the rest of the group.It means he's leaving anytime soon. Likewise a frontman who is not pictured at the front of a group shot can show an underlying lack of confidence.

Subtle clues belie the true picture of the internal workings of any band.Bands that send me a press pack consisting of photographs of individual members and their individual bios are immediately ignored, you would be suprised how many 'bands' are not actually a functioning group at all.

When I heard Ripping Corpse's demo coming from New Jersey, they went straight to the top of the pile of bands to check out. Morbid Angel's manager even took me to a rehearsal in deepest Jersey where I met Erik Rutan for the first time.The band truly shredded through a few blistering songs, and i was impressed by the music, but for some reason the look of the singer bugged me, I thought it odd he was so Hardcore looking, and so i did'nt like the whole package of the band. Its quite possible David Vincent gave me his opinon, but either way i decided to pass on the band.As it happened Erik Rutan joined Morbid Angel a few years later and his band Hate Eternal recorded for Wicked World (Earache sub-label) after he left Morbid Angel.

Nowadays of course its totally normal to have DM and HC guys in bands,back then it was unknown.The massive metalcore scene is proof that HC and DM can mix, maybe Ripping Corpse were just too ahead of their time for me.

Heres Ripping Corpse in their prime:

I reckon A&R wasn't as easy back then as it can be now, thanks to the Internet.

Yet, I wonder how much labels trust plays and visits to Myspace/Websites/Twitter and how much they're into the "fans" count. We all know most bands boost those numbers (it's easy on Myspace and super easy anywhere else) and we all know a lot of bands aren't bands anyway (projects most of the time, shopping around as a true, touring band).

I also wondered if being a touring entity was mandatory to get signed these days? I know that a lot of the income comes from touring but what if a band just doesn't want to tour, let a lone play live? There are a lot of great bands out there (some projects, too) which are releasing great music but are never performing to an audience. Would you agree signing them anyway?

holy shit this is the most retarded thing i've ever read. you actually gave a shit about the way some dude dressed? faggot.