Carcass- why so many versions of 'Necroticism'? 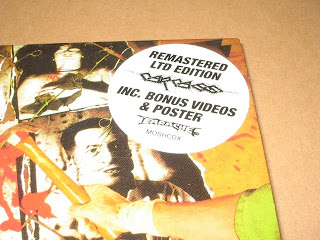 Question: Dear Earache,
I have been collecting Carcass since 1991 and recently acquired a USA pressing of 'Necroticism' from 2004. The back cover is different to all other versions of that album (I own 6 copies on CD now) with alternate mortuary pictures and a yellow Carcass logo as opposed to the usual purple one. Also, on this pressing the actual disc has been accidentally screen printed with the 'Swansong' disc art and cat no. MOSH1601CD!

Can you possibly explain why the rear artwork is different for this version?

Answer:You own 6 copies of the same album? Blimey, I take my hat off to you Sir! Thanks for supporting the band and the label, its appreciated I tell ya. Hey, can I suggest you take a snapshot of the back of all the Cds together and include the link to the pic as a comment here- I for one would love to see all the versions we made, its hard to remember them all actually.

Your question is interesting because fans don't realise how much work behind the scenes it takes to keep anything in print pretty much continuously for 18 years- its impossible to manufacture the exact identical same thing for 2 decades straight.Look at cans of Heinz beans or Coca Cola from 1991 and they don't look anything like todays products.

The manufacture of the record has had to keep up with the changes with printing technology which have occurred over the past 2 decades, the change from analog printing to digital being the main one.Plus, the label has moved pressing plants maybe 10 times in that period, as many went bust in the 90s recession, moving the printing process to each new plant brought its own subtle variations to the CD. 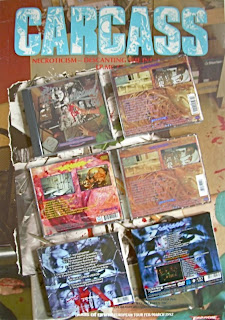 On top of those changes, Earache itself has made maybe 6 major overhauls to the audio on the CD and cosmetic surgery to its artwork to signify a special edition, remastered version or most recently the deluxe, lavish digipacks with documentary DVD which came out last year.This was done to keep the record fresh in the minds of the high street record retailers, and reflects the ups and downs of the bands popularity.

The original art was literally made with scissors and prit-stick, cut and pasted by hand by Jeff Walker and Martin Nesbitt (Carcass Manager and early Earache employee).This was photographed on camera and turned into a set of CMYK printers films.This original edition was reprinted for a few years unchanged,print-wise these are undoutedly the best quality versions of the album. It has been Earache art dept staffers who have created all the versions since.

In late 90s printers went digital and the laborious process of digitising and scanning in the artwork began. Scanners back then were terrible and the quality of resolution was poor so the printings from that era suffered. In America the production manager even took artistic license to 're-create' the back of the sleeve, presumably because the scan didn't work properly on the day, trouble is he didn't pay any attention to the original, hence the yellow logo. Luckily this was rectified in later runs, and as scanning resolutions got higher the quality of the CD printing became better.Even $100 desktop scanners are amazing nowadays.

The catalog number change you mention is to do with our distribution by EMI in US, who require labels to use an 8 digit indentification code of each product for werehousing purposes.This is annoying because an added 1 is placed in each MOSH number but is done to fit their computer system.
Posted by Digby at 9:59 PM

(I am missing one CD in the photo, which is the 1995 reissue that contained the "Tools of the Trade" bonus tracks and had a black square placed over the original track-list and the song titles written in white. This picture also omits the LP version which has a different picture, yet again)

Not to hassle Earache, or course, but it always amused me that the songs 'Corporeal Jigsore Quandary' & 'Incarnate Solvent Abuse' were incorrectly labelled on all versions of the CD! ;)

Perhaps you may be interested in a facebook 'Ultimate Carcass' quiz that I created during a bout of boredom:
[url]http://apps.facebook.com/ilike/quizzes/take/95034[/url]

Thanks again for the great extensive answer!! :)
Daniel