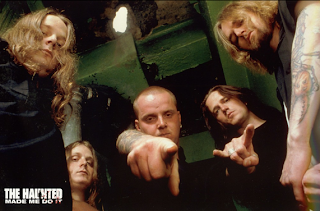 Question: is it possible earache actually predicted the new wave of thrash? by that i mean before municipal waste made it trendy. If i remember in an interview whilst on tour with the haunted kerry king said about how kids should play attention to what the haunted are doing and take notes. this was back in 02-03 during the marco era. if this is true surely that means that line up of the haunted are the daddies of the scene? From:


Answer: This is an interesting one- yes, there is more than a grain of truth in what you say, but its not the complete story. Basically Prime-era SLAYER is the definative THRASH style, hence, any band which is heavily influenced by SLAYER becomes by default a de-facto Thrash band.Back in 2000-2003 The Haunted were just one of several bands(Carnal Forge, Dimension Zero were vaguely similar) taking a major influence from Slayer, but they also happened to the best band in the world at doing it.Even Kerry King noticed and did name-check The Haunted for big things.

The Haunted formed in the late 90's out of the ashes of the legendary At The Gates and by 2000's second album The Haunted Made Me Do It (open in Spotify) the band were pretty unique in playing mid-paced Slayer-ish Thrashy Metal with the cruelly under-rated vocalist Marco Aro on vocals. I think we even referred to the band as Thrashy-Death-metal in press releases at the time, but pure Thrash as a style was, beleive it or not, seriously uncool and out of fashion back then.

At the turn of the millenium, 80s Thrash as we knew it was a faded force, a distant memory.Most thrash bands has split or quit. Even the big 4 were in the doldrums, searching for that elusive radio hit.In 2000 Metallica were peddling symphonic metal with S&M, and the band were deep in psycho-therapy sessions,so all-out thrashing was not on their agenda.Slayer were'nt as terrible, but Diabolica in Musica was seen as treading water by many fans, including me. Megadeth were playing mainstream rock with 'Risk' and would imminently be dropped from their long-term major label Capitol.

Listening back to The HMMDI album now, it is stunning, and catchy- especially the Bury Your Dead, The World Burns and Victim Iced songs - these are remarkable and amazing in their Thrashy-ness.All the remarkable given the mainstream metal world at the time was marching to the Limp Bizkit-led Rap metal/nu Metal tune.

As an aside, younger blog-readers might not realise just how utterly dominating Limp Bizkit were in the rock/metal sales charts a decade back.Today a band like Lamb of God is hailed as the metal-scene's saviours by selling 60,000 copies first week in USA, but Limp Bizkit sold over 1,000,000 copies of their Chocolate Starfish album first week in October 2000.Thats not big, its simply gargantuan.

So, yes the HMMDI album did indeed pre-date the coming Thrash hordes by a good half a decade, so its good you bring it up, but Thrash was just one of the influences in the Haunted's Gothenborg melting pot of more death-metally influences.

The coming 2006 wave of Thrash bands (forming the current NWO Thrash Metal) would be playing only pure thrash or HC/Crossover thrash, no death metal influence and certainly no growls. 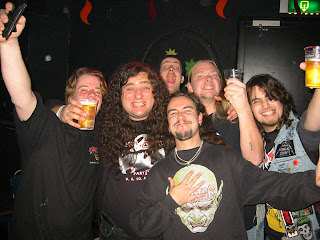 As far as I can tell, during the dark days of 99-2003 only in Germany was 'pure thrash' still fighting for its survival- it had gone seriously underground and off the radar, but amazingly, I think it was Tankard (pic above) with their unique brand of beer-fueled pure-Thrash who were the crucial missing link between the old timers and the new breed.