Question: Hello Dig, I was just wondering what you thought about the heavier end of the garage punk scene? Old bands like the Dirtys, the Revelators and the Motards, while in no way metal, were pretty fast and extreme for garage music. Do you like this sort of stuff? Also, I was wondering if you ever saw the X-Rays, they were a garage punk band for Nottingham in the 90s.Finally, any thoughts on Billy Childish? That geezers been around even longer than you have! From:


Answer: No dude, for some reason the Garage Rock scene has completely passed me by. I just checked out The Dirtys and did actually quite like em. Generally the music just sounds too retro for me. The nearest I've gotten to garage might have been The Hardons, New Bomb Turks or Hellacopters all of these bands had an Earache connection for a while.Entombed made a 7 inch single split with NBT on Earache, and Entombed's Nicke Anderson formed Hellacopters, who became very successful in the 90s. 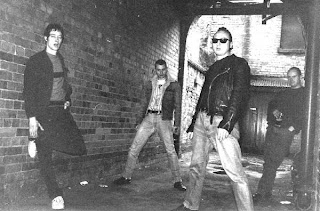 The X-rays (pictured) come from my home town, Nottingham, so I do know them a bit.Even tho they split up ages ago, the ex-members can still be seen at various drinking holes around this city.Bassman Coop is a local hero, and frontman Gaz could be found behind the counter in local legendary record shop Selectadisc for most of the nineties. Drummer steve was in an Earache band called Heresy before X-Rays so we have a slight connection there.

As for Billy Childish, bizarrely I had no clue who he was until this question popped up on the blog.I had no pre-conceived idea of the bloke. After a bit of research, he seems a thoroughly decent, knowlegable and highly astute fella, and I quite like what he says in this Audio Interview
Posted by Digby at 12:22 AM